Owners of the Moto 360 smartwatch have exercised extreme patience in regards to future updates of Android, but now it looks like the wait could be over. Proud wearers of the gorgeous Moto 360 timepiece will be delighted to hear that Android 5.1.1 has now begun rolling out to the device as an over-the-air (OTA) update. Like most updates of this nature, it may ultimately end up taking a few days before all Moto 360 device owners start seeing the update filter through to their devices.

The latest update in the world of Android Wear, version 5.1.1, originally announced back in April, has already started to filter down to a number of other popular wearables, which is partially why Moto 360 owners have been left feeling a little disgruntled and forgotten about. There hasn’t been a great amount of official communication coming out of the Motorola camp regarding the issue other than to say that a number of “performance issues” and concerns had delayed the Android Wear 5.1.1 update from hitting the device, but it seems that they have now been resolved, hopefully, giving the green light for the update to be pushed out to all owners. 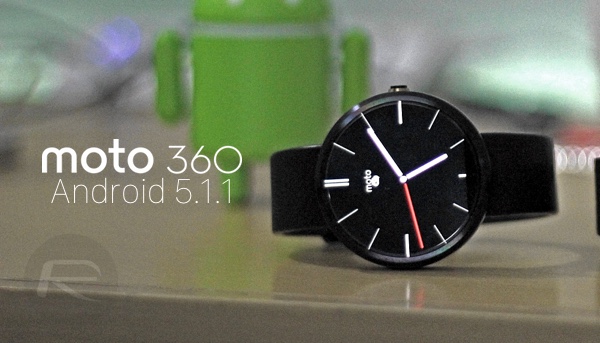 One of Google’s senior developers, Wayne Piekarksi, confirmed the immediate rollout of Android Wear 5.1.1 to the Moto 360 Android Wear device via his own Google+ account, taking care to manage expectations regarding the delivery time of the update:

Just to let you all know, the latest version of Android Wear is going to start rolling out via an over-the-air (OTA) update to the Moto 360 today! OTA rollouts are always done over a period of many days, so it will take some time to receive your update.

Users of the Moto 360 will be able to enjoy additional features within Android Wear such as connecting the watch directly to a WiFi network to receive notifications without a connected smartphone, as well as the addition of new emoji input, new app launcher and more.

Let’s hope those performance issues have been finally put to bed though.