October will be a huge month for Android. As well as the introduction of Google’s new Moto X-like Nexus smartphone, there’s also the small matter of the rumored Android L release to contend with, and although the Nexus will surely be the first to ship with the Big G’s new mobile OS out of the box, Samsung’s flagship Galaxy S5 won’t be too far behind. In spite of the fact that we don’t know precisely when Android L will roll out, let alone when it will hit the S5, a video has already hit the Web showing the Korean company’s prized asset running on the impending software.

We already have a decent idea of what Android L will look like and how it will run, thanks largely to the early unveiling at this year’s I/O developer gathering. Material Design may sound like a fanciful slogan, but aside from the visual enhancements it offers, will also ensure that the platform feels much more intuitive, fluid, and generally enjoyable to use. 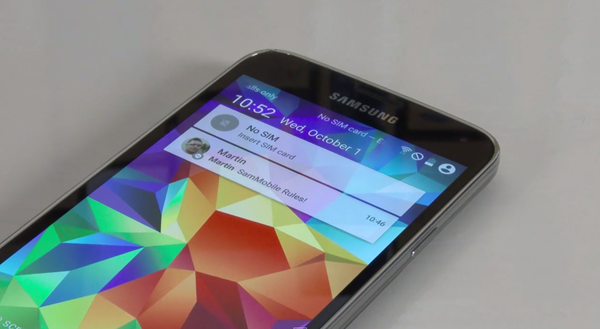 The 8-minute long clip of the S5 running Android L has emerged courtesy of the folks at SamMobile, and as well as giving us another glimpse of what’s in store from Google, also offers a preview of how Android L will function alongside Samsung’s very own TouchWiz overlay.

The Galaxy S5 seen in the video dons the model number SM-G900F, and while you may be wondering whether SamMobile plans to share the love and allow others to flash the Android L ROM, the blog does mention that it’s too bug-filled and laggy most people to tolerate. But in our books, a ROM is a ROM, and it will be out there in the wild soon, and it’s good news for some users.

Still, while we mightn’t yet be able to test it out, the clip does let us envision the Galaxy S5 when it does eventually get its Android L update, and whilst it’s presumed that Android L will be available sooner rather than later, it does pay not to take anything for granted in this game.

As such, we’ll be keeping on the lookout for any sure signs that Android L is as imminent as they say, and while you wait with us for this day to arrive, be sure to check out SamMobile’s clip that we’ve embedded below.