Do you want to know how much influence do you have on Twitter?

The number of times you get referenced or retweeted by others?

The number of times you retweet and update? or How well do you pass on information to others through Twitter?

Well Twilalyzer is the right tool for you to get all the answers!

A short report is provided on:

For an example. lets twitalyze @Microsoft:

The sample twitalyzer report that we got for @Microsoft is below: 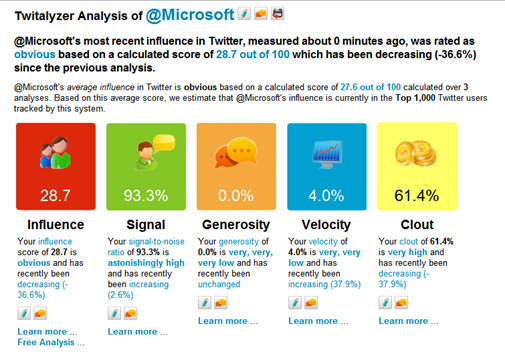 If you want to know more detail, you can click Learn more under each column. For each measure, separate graphs are provided that tell how how well you have performed in a particular regard over time. For example for influence:

You can also view the details of your recent activity on twitter in terms of your followers, friends, updates etc as seen in the screenshot below: 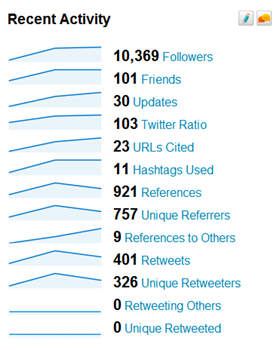 Comparing your activity with other twitter users (maximum 4) is also possible through:

You can also view reports on the activity of:

Twitalyzer demonstrates pretty innovative use of Twitter API which has not been created for any other social networking site (like orkut and facebook atleast). Its extremely useful for people who want to increase their popularity or fan following. The latter can monitor their activity and work accordingly. This is also a sleek way of Twitter to increase its use. People as sensitive and a Twitter fan(like I am) will get a mini-heart attack when they’ll see 0% generosity-seriously I did !.

Whatever the case may be, its a pretty cool tool! I got my Twitalyzer report and have 0.5 influence 🙁 .How much influence do you have?