Just when you thought it was safe to enter into the Photography section of the iOS App Store without fear of stumbling across yet another filter based camera app, the guys over at Realmac Software have something that will surely divide opinion. The majority of iOS users will more than likely be familiar with the company’s existing Clear for iPhone app that took the App Store by storm and later made an appearance on OS X, but it’s their latest Analog Camera creation that is grabbing the attention at the moment, and we love the whole idea, too!

Realmac has form when it comes to taking a tried and tested notion and making it into something beautifully simple. The existing Clear app and the newly unveiled Analog Camera may be worlds apart when it comes to intended functionality but it’s immediately evident that the same design principles have been applied to both projects from the beginning. Like Clear, the purpose behind Analog Camera seems to be to abstract a lot of cluttering features away and produce something that is not only highly functional as a camera and filter app but also easy and fun to use.

The interface of Analog Camera can be best described as minimal, with the user being able to apply a different attractive filter to the captured photo with a simple tap on one of the prominent tiles at the top of the screen. The bottom of the user-interface is reserved for sharing and saving options, with it being quite clear that Facebook and Twitter sharing are the preferred two options. The extremely elegant flat design of the app should definitely stand it in good stead for the upcoming iOS overhaul – as long as it goes like we all expect and features a flatter interface. 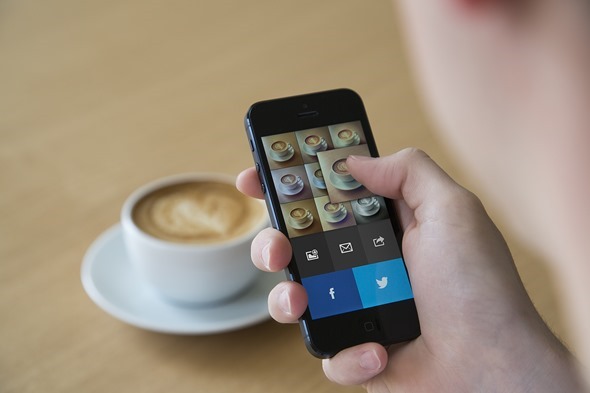 Analog Camera might not set the App Store on fire when it comes to functionality. It doesn’t really do anything that Instagram or a whole host of existing apps don’t already do other than having the option to share to various networks and different services like Evernote and Path. However, we can go as far as to say that doing something simple, but beautiful, is always a good goal to aim for, and in this instance it looks like Realmac has achieved that once again. Analog Camera will be available soon on the App Store, and we will definitely inform our readers when it is, meanwhile, check out the app in action below: