An Interesting Look At How Long Each iOS Beta Period Lasts

While most consumers only pay attention to an iOS software update when it pops up on their device or in iTunes, the lengthy beta process beforehand is when said firmware version is perfected. With new features come new compatibility issues, which frequently see a beta release revised several times before eventually reaching the end-user. One iOS enthusiast by the name of Will Hains decided to dig deep, creating a breakdown of each iOS iteration from its inception as the old iPhone OS back in 2007 up to the present day.

As can be seen from the chart, iPhone OS 2 managed to get through an incredible eight betas before finally being declared ready for release, which is, along with iOS 5, the most betas of any firmware version of Apple’s mobile operating system.

Meanwhile, iPhone OS 2.2 and 3.1 were created significantly quicker than any other, with just two and three betas respectively, and perhaps even more interestingly, the latter of the two is the longest-serving edition to date, managing an incredible 285 days as Final.

iOS 6 is currently only in its second beta, but with a long way to go until the final release sometime this fall, there remains plenty of scope for that number to rise considerably. The reason behind iOS 5’s delay was largely due to the introduction of iCloud, but even though the sixth edition of the Cupertino company’s iconic iOS operating system is regarded by some as harboring only minor updates, there’s still plenty there – namely the brand-new maps app – which could scupper the development and subsequently, the release schedule. 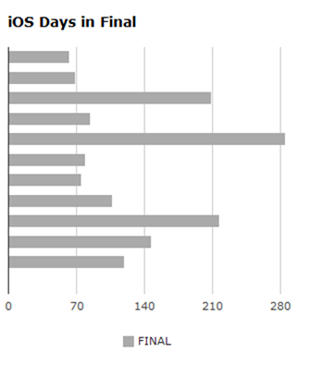 Like many long-time iOS users, the chart did trigger a few fond memories. Notably, using iPhone OS 3.1 on an iPhone 3GS, which was a great deal easier to jailbreak and unlock than it has become in more recent times.

I sincerely hope the beta period for iOS 6 doesn’t stretch to or beyond the 128 days as it did for iOS 5, otherwise we could be in for some severe delays. Whenever Apple plans to release it, let’s just hope we don’t have any release-date scandals, such as the battery drainage issues some iPhone 4S users experienced back in October.

iOS 6 is expected to arrive this fall, along with a brand-new iPhone which should, if reports are correct, include a larger LCD display.