Microsoft’s Xbox 360 has received yet another shot in the arm, with a new player coming online in the instant content streaming portion of the console’s developing world.

Having already outed a PlayStation 3 app, Amazon has now seen fit to bring Xbox 360 owners under its wing, allowing those with both an Xbox LIVE Gold account as well as an Amazon Prime subscription to stream movies and TV shows instantly.

The app, which allows the streaming of content for Prime subscribers as well as a pay-as-you-go option for non-subscribers, Amazon Instant Video adds to the constantly growing collection of streaming video companies that have brought their wares to Microsoft’s console. 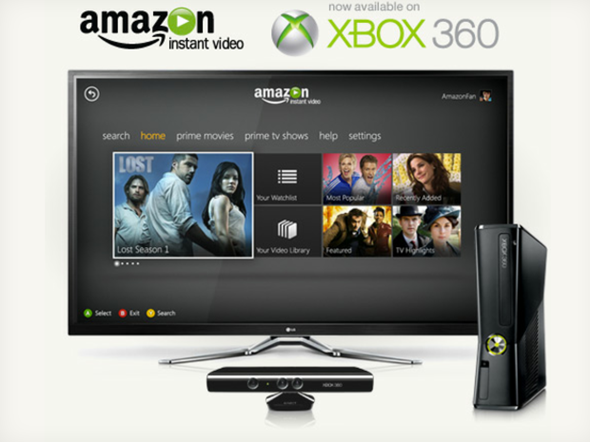 Just as you would expect from a new Xbox 360 app, Amazon’s offering also features Kinect integration, allowing viewers to navigate in-app menus by waving their arms around like a loon. Those of us with a more refined taste in interfaces can stick to the control pad, or indeed one of the many Xbox 360 remote controls that are currently available.

Kindle-like WhsiperSync technology is also built right into this Xbox 360 streaming app, which means people can start watching content on, say, their Kindle Fire, and then continue it from the comfort of their living room. It’s one of those things that, once you get used to it, you wonder how you ever lived without. Can you imagine your Kindle books not having WhisperSync? No, neither can we.

Unfortunately, users cannot purchase content via the Xbox 360 app, though there is a watchlist of sorts, allowing content to be queued up on a computer for later viewing from on an Xbox 360. Amazon giveth with one hand, and taketh away with another.

Microsoft’s Xbox 360 is seeing something of a gold rush as far as streaming media apps go of late, with all the big players already jostling for position in the hearts and minds of gamers. HBO, Netflix and many others are already present on the extremely popular gaming machine, and with the next Xbox expected to debut as soon as next year, content providers will want to get their feet under Microsoft’s table nice and early, in anticipation of being ready nice and early for that shiny new hardware.

It’s not just games that sell home consoles these days folks. Internet connectivity and streaming media are big features for all the major game console players, and the next round of hardware will be no different.