Online retail giant Amazon first unveiled its cloud-based music service back in mid-2011, and after a lengthy wait, the company has today released the accompanying iPhone app, which is essentially the spitting image of the Android iteration.

One key feature, however, is that one cannot purchase music within the app, although Amazon is used to dealing with this limitation, having removed the buying option within its Kindle app to comply with Apple’s strict policies. Rather than inviting healthy competition, you see, the Cupertino company would rather handicap any app in direct competition, thus the only way one can purchase books, music, video, and other such content, is through the App Store, iBookstore and iTunes apps. 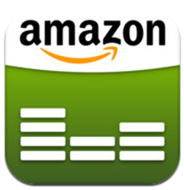 Still, customers of Amazon’s cloud service can still access and play music stored in their Amazon Cloud drive, as well as creating and managing playlists, downloading songs for listening offline, and streaming songs via Bluetooth.

Like most cloud services, it offers a small chunk (5GB) of free storage, and, at least for the promotional period, will offer anybody purchasing a storage plan to keep unlimited MP3 and AAC files for no extra charge, which is a pretty good deal if your main use for Amazon’s cloud-based offering is to store and listen to your tunes.

The launch of the app is accompanied by a press release, and Steve Boom, Vice President of Digital Music for Amazon called it the "most widely compatible cloud playback solution available." While it may have been shaded out in terms of publicity by the likes of Apple, Microsoft and Google with their respective cloud services, Amazon has been working hard in the background to deliver some solid competition.

The unlimited music (well, at least for the two most popular (lossy) file formats), is certainly a huge trump card, and although early adopters of SkyDrive were treated to 25GB of storage space, the ability to store every track in the cloud, and the ease in which they can be picked off for online listening, certainly throws some weight behind the Amazon offering.

It’s absolutely free of charge, and you can download it via the link provided below.