After Angry Birds, Fake Instagram App For Android Poised With Malware Surfaces In The Wild

One way Trojans, malware, and other general unpleasantries infiltrate Android devices is through the most popular apps. In order to maximize the potential carnage, the most sought-after titles downloaded by millions are often singled-out as easy pickings.

The Legacy Native (LeNa) malware, which was first discovered late in 2011, is currently operating via a fake version of the latest installment to the billion dollar franchise Angry Birds. Released last month, Angry Birds Space has already been downloaded millions of times, and Android users are urged to be vigilant towards any suspicious, unofficial download sources. Now, latching onto another fast-growing, influential mobile app is the very latest threat to Android, which has been discovered via a rogue Russian website. The Android app of Instagram, which was recently acquired by Facebook for an eye-watering billion dollars, is the latest victim, and its imposter is currently circulating through unapproved sources, much like the dodgy Angry Birds Space file. 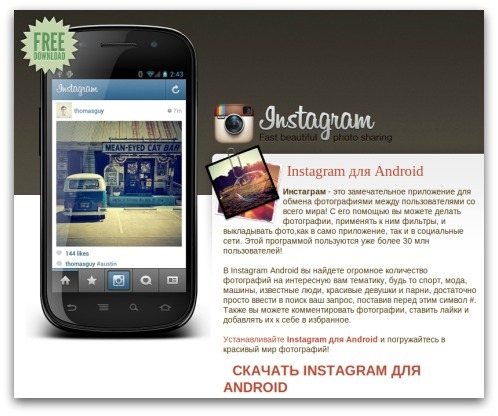 The Russian website claims to be an official Instagram site, and while many can easily spot the tell-tale signs of a fake-looking portal, not everybody is as clued-in, and can easily fall prey to simple scams through fake webpages.

Once the app is installed on a device, it then begins sending premium rate SMS messages in the background, making quite a bit of easy cash off the back of Android users, all of whom will no doubt be aghast when they discover their bill has increased exponentially.

With well over 30 million users – as well as having only recently been ported through to Android – the release of this malware is cunningly timed, and could have been planned months in advance as the Instagram team has teased info regarding the Android iteration regularly in the last few months. Sophos has detected the malware as ‘Andr/Boxer-F,’ and those running the security firm’s smartphone suites will have automatic protection from it.

The last we heard, Android malware had increased 472%, and that number is showing very little sign of let-up as the barrage of malicious and fake files just keeps on flowing. Certainly, Sophos’ senior technology consultant Graham Cluley seems to think so, noting that Android malware is becoming a bigger issue as time progresses, while also warning users to exercise extreme caution when downloading apps from sites – especially the unofficial outlets.