With the release of the iPhone 4S in October 2011, we also saw the public release of the iOS 5 operating system which powers it. Naturally, registered developers already had their hands on iOS 5 for quite some time, meaning; when the public offering was announced during the 4S keynote, few people were surprised at the operating system’s capabilities. However, putting the lack of surprise aside, one of the largest update to the latest major version of iOS is the way in which it handles and displays notifications.

You may immediately think that something like that wouldn’t be required or would not be very functional, but, some of the most popular tweaks in Cydia do little more than provide a visual enhancement to some part of iOS. As functional as the operating system is, certain parts of it certainly do benefit from a little visual customization, which is exactly what ‘Flowtation’ does to Notification Center. The whole concept of Flowtation is to give the illusion that Notification Centre has been placed above the current screen, whether it be your device’s SpringBoard or within an application. Invoking Notification Center, then brings Flowtation to life and provides a smooth transition between the existing screen and the notifications. 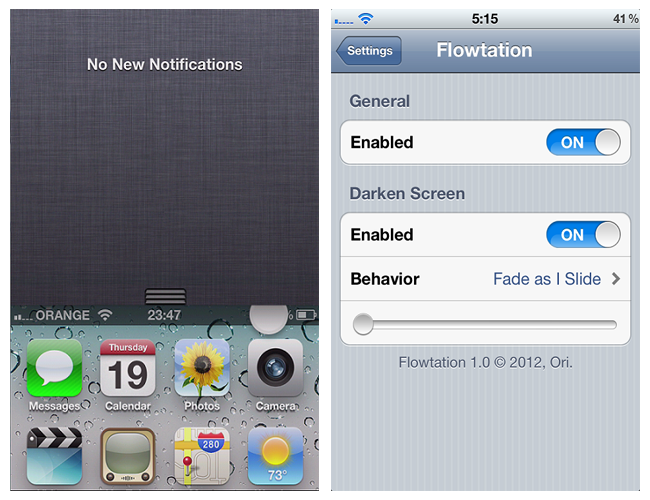 One of the major benefits of Flowtation is that if offers the benefits of a smooth, beautiful transition animation without producing any lag on the system. Although the developer has tested Flowtation across a number of devices with various popular tweaks installed, obviously user results may be different but he is pretty confident that no lag will occur. Flowtation is also compatible with the hugely popular IntelliScreenX application and the developer is keen to point out that the tweak has no known compatibility issues whatsoever. Flowtation also comes with some additional entries into the Settings application; giving users the ability to toggle the tweak on or off and add either a solid state or a faded transition experience/effect.

Flowtation is available on the ModyMyi repository in Cydia at a cost of $0.99 and is compatible with all iPhones and iPod touches running iOS 5 and above.