8GB iPhone 4 For Just $49 On Contract At Best Buy, Grab Yours Now While It Lasts!

All the talk may currently be surrounding the unannounced iPhone 5, but there is still plenty of life in the two models that are currently on the market. Apple’s iPhone 4S is arguably the best smartphone out there right now, especially if you don’t want to go the Android route, and the iPhone 4 is becoming a killer budget smartphone in its own right.

As if the thought of an iPhone 4 being a budget handset is not absurd enough, the latest news coming out of BestBuy takes matters to a whole new level of craziness. According to reports, the American big box retailer is now offering Apple’s iPhone 4 for just $49 on contract. Bargain or what?!

The $49 asking price will get you an 8GB iPhone 4 on any of the three carriers that currently support it, so that’s AT&T, Sprint or Verizon. Potential buyers will need to take out a two-year contract in order to take advantage of the special price, though, but with lengthy contracts now more the norm than the exception, that news should not come as a surprise to anyone.

The iPhone 4, with its 512MB of RAM and A4 processor is still a powerful handset to carry around, and features Apple’s awesome Retina display. With more pixels than the human eye can see at the usual distance we hold our phones at, that screen really should be seen to be believed. Given the amount of excitement over a Retina display being added to the latest iPad, and potentially the new MacBook Pro notebooks, it is clear just how important those pixels really are. 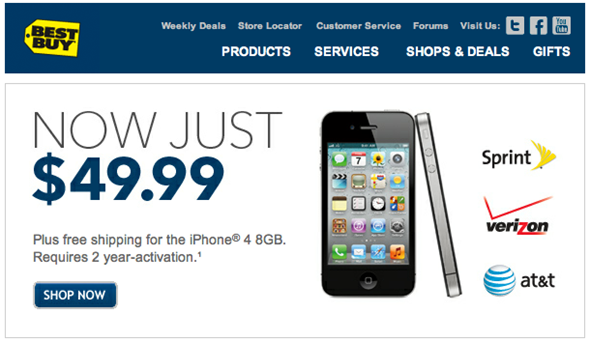 The iPhone 4 may not be the phone that many smartphone owners will upgrade to, but it has great potential as a gateway drug for those that currently own so-called ‘dumb phones.’ With plenty of power and an App Store that is full of great apps, the iPhone 4 could see plenty of new users be pulled straight into Apple’s burgeoning iOS ecosystem. Buy an iPhone 4 today, and buy an iPhone 6 when your contract is up. Apple wins left and right.

Just to sweeten the deal – because the iPhone 4S looks like like the iPhone 4, people will never know your smartphone is two years old. Result!