YouTube is by far the foremost site for viral videos, and although the Android app isn’t too bad (it’s a lot better than the rather terrible iOS version, after all), it doesn’t house the ability to simply repeat a video in a loop.

With literally hundreds of millions of videos to choose from, one could argue the feature isn’t needed, which is probably why neither the apps nor the site itself actually cater to repeat. However, with so many music videos and tracks available, it makes perfect sense that some would wish to play a video in a loop, and thanks to one particular Play Store app, well, now you can.

We all know that some videos are insanely addictive, forcing us into watching again and again, and thanks to the suitably-named app called YouTube Repeat, it can be done with apparent ease. Based on its free-to-use web service, the YouTube Repeat app will let you locate and play your favorite YouTube videos in an endless loop.

Next time you stumble across a video you simply cannot get enough of, you needn’t incessantly tap the "Repeat" button at the end of each video, since YouTube Repeat will let you watch it in full-screen in an infinite loop. While the app will certainly be a timesaver for many, it unfortunately neglects to cache the streamed content. Thus, each time it repeats, the video buffers all over again, and if you’re shrewd about how much bandwidth you’re using, this is a pretty solid way to waste it. 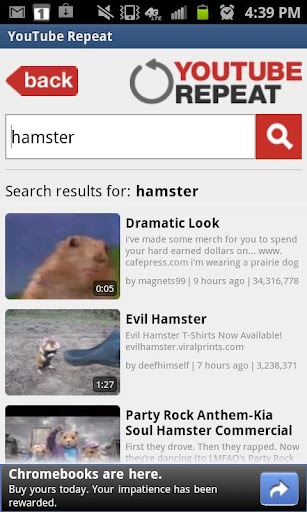 There’s no room for the comments or related videos you’re accustomed to in the official YouTube client, but in all honesty, both only serve to distract you from whatever you were initially concentrating on.

YouTube Repeat can be download absolutely free of charge from the link provided below, and who knows; maybe you’ll end up replacing the stock offering. As long as you can do without the comments and related, have unlimited data, and like hearing videos on repeat, you needn’t look any further. 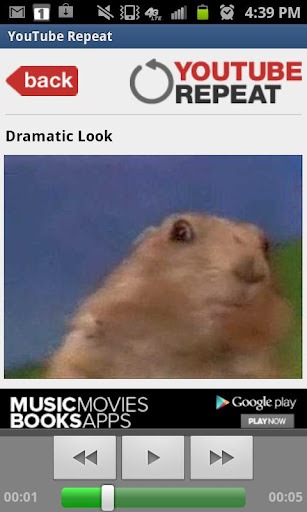