You Can Buy Awesome PS3, PS4, PS VITA Games For Under A Dollar [Limited Time Offer]

Times are hard, and with smartphones and watches costing hundreds of dollars, each something has to give. Thankfully, that something doesn’t have to be your gaming obsession thanks to Sony and its latest gaming sale. In fact, we would probably say that the word ‘sale’ doesn’t truly do this thing justice. Now ‘price massacre,’ that sounds a little more like it.

Available on the PlayStation Store, Sony’s sale includes a raft of titles ranging from classics like Dino Crisis to popular indie games like Tokyo Jungle and everything in between. If you need a game to play this weekend but don’t want to break the bank, then this sale is for you. The titles on offer include games for the PlayStation 3, PlayStation 4 and PS Vita, too. 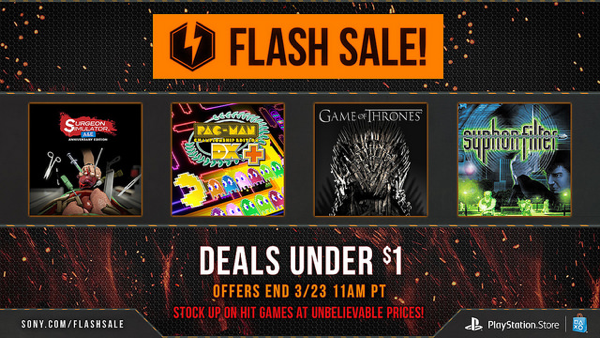 But we haven’t told you the best part yet have we? These games, some of which we would argue every gamer should get to play at some point, are all available for less than one of your American dollars. What else can you buy these days for under a dollar?

With sale reductions reaching as high as 96%, titles like Syphon Filter, the full Back to the Future series and Echochrome can all be downloaded right now. Now if you’ll excuse us we’re off to buy Tales of Monkey Island for the bargain price of $0.80 – down from its original $19.99 asking price. We suggest you do the same.

Don’t delay though, because the sale ends at 9:00 a.m. Pacific on Monday, March 23 and you really don’t want to miss out.