It’s a big couple of weeks for gamers with the release of Fallout 4 on the horizon and Microsoft’s Xbox One seeing its software receive its biggest update yet.

Microsoft’s Xbox One is set to receive a brand new Windows 10-powered dashboard update on November 12th, that much we already know. We also know that the machine will receive Xbox 360 backwards compatibility as part of that update, but with that compatibility being powered by software, not all games will actually work. In fact, Microsoft needs to do some work in order for any Xbox 360 game to work on the Xbox One, limiting the number of titles that will be playable with the new update.

While we don’t have any official word on which games will be compatible with the Xbox One post its Windows 10-powered update, one source claims to have managed to get its hands on an official list of the titles, though its authenticity cannot be verified.

Xbox Dynasty has published what it claims is an accurate list of the Xbox 360 titles that will work with the new backwards compatibility coming with Xbox One’s November 12 dashboard update. The list may not be exhaustive, and it may even be downright wrong, but we won’t have to wait too long before Microsoft puts us out of our misery anyway, as we’ll know for sure on the 12th.

If this list is indeed accurate, then fans of the Halo franchise will be overjoyed to know that all of the Xbox 360’s Halo titles will be compatible, as will classics such as BioShock and Saints Row. The list of games has some stunners in it, but also some less likely to get the blood pumping, but until Microsoft announces its list for real, we’ll just have to wait and see how accurate Xbox Dynasty’s offering is.

Hopefully not too far off, at least. 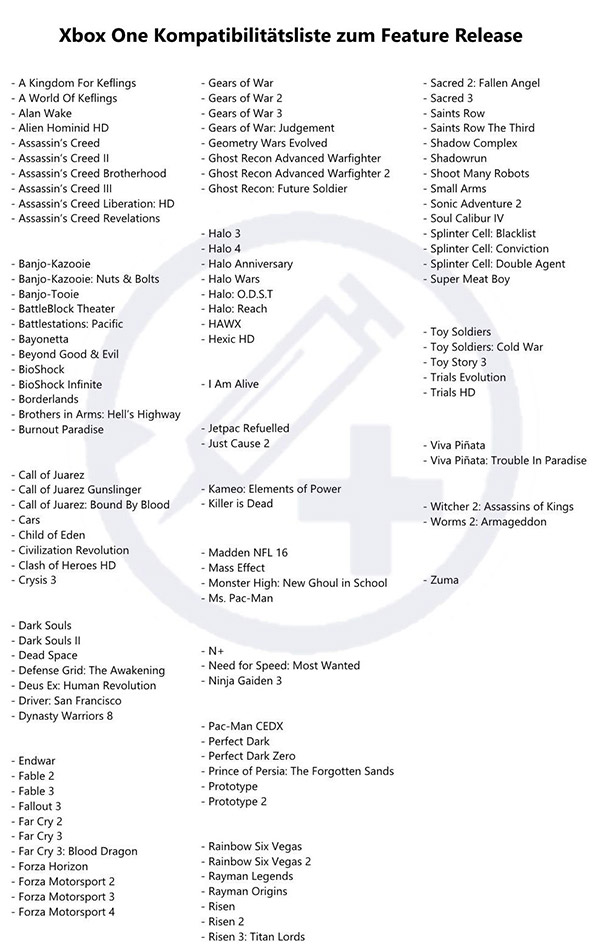