Microsoft has today ditched Windows Home Server while simultaneously unveiling four new editions for Windows Server 2012. The four editions, which are aimed towards different types of businesses and enterprise, consist of Standard, Datacenter, Essentials, and Foundation.

This method of simplifying editions mirrors the moves made with the Windows 8 client side, and makes things a little less bamboozling for users by dropping the total iterations from a dozen to the new four-some.

In addition, the Redmond-based company also confirmed there’ll be no separate Windows Home Server edition this time around, but rather a concoction of the features from company’s small server lines into Windows Server 2012 Essentials. Accompanying the announcement was an FAQ, that paints Windows Server 2012 Essentials as "the ideal first server operating system for both small business and home use."

Q: Will there be a next version of Windows Home Server?

A: No. Windows Home Server has seen its greatest success in small office/home office (SOHO) environments and among the technology enthusiast community. For this reason, Microsoft is combining the features that were previously only found in Windows Home Server, such as support for DLNA-compliant devices and media streaming, into Windows Server 2012 Essentials and focusing our efforts into making Windows Server 2012 Essentials the ideal first server operating system for both small business and home use—offering an intuitive administration experience, elastic and resilient storage features with Storage Spaces, and robust data protection for the server and client computers.

Windows Server 2012 Essentials is the latest version of Windows Small Business Server Essentials. It is a cloud enabled first server with an intuitive user interface. It can run on physical servers with up to two processors and has been designed for small businesses with up to 25 users. 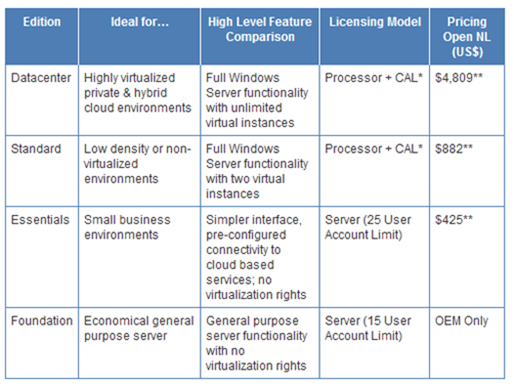 While the discontinuation of a dedicated Windows Home Server SKU will be a big disappointment for some, but there is no denying the fact that WHS based products in general really struggled to sell off the shelves, despite having great potential.

Back in late 2010, many Windows Home Server users were left cursing when the company opted, for reasons unbeknown to consumers, to remove the Drive Extender feature of Windows Home Server 2011, a handy function which allowed one volume to consist of several small drives.

Often the target of bemusement among PC users in times passed, the software maker has garnered a mostly positive amount of coverage during the past twelve months. The Metro user interface – despite being seen as a better fit on a tablet – has proven a hit among Windows 8 previewers, and those looking for a touch-based Windows 8 experience also have the Microsoft Surface to look forward to (although important questions such as when, and how much, remain unanswered).

Share your thoughts with us on this announcement by dropping us a line via our Facebook and Google+ pages.