YouTube is the most frequented video streaming site on the web, and as such, most smartphone owners require a decent app for viewing the very latest and most entertaining content.

MetroTube for Windows Phone used to be among the most popular for Microsoft’s mobile ecosystem, but was pulled from the Marketplace several months ago by developer Lazyworm due to issues which, at the time, couldn’t guarantee the app’s future.

However, by means of a blog post, the company has today announced the rebirth of MetroTube, and although it hasn’t been able to obtain official support for the app – the main reason why it was discontinued in the first place – it will simply make do and continue support for the app. 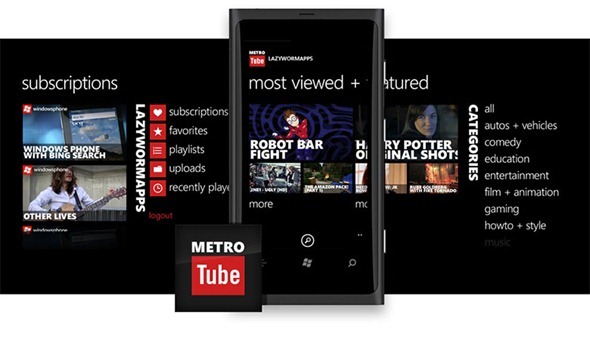 It hasn’t been ascertained whether YouTube owner Google, Windows Phone creator Microsoft, or a combination of the two giants played a part in MetroTube’s original demise, but Lazyworm’s reintroduction of the app comes attached with the battle cry toward its user base of "justifying the need for Google or Microsoft to show us a little more support."

"We don’t want to see the project that has consumed a year and half of our lives go to waste like this," said the developers, "and so we’ve decided to re-launch MetroTube for free."

Although not yet available, the app has been published, and should begin to appear over at the Marketplace in the next couple of hours.

The app itself was great, but the seemingly political overtones attached to the entire situation does seem to have left a sour taste in the mouth of the developers over at Lazyworm.

I sincerely hope MetroTube is as good as I – and many other users – will remember, and perhaps even more so, I hope the overt issues surrounding the app are resolved or, at the very least, don’t have a massive effect on the app to the point whereby it’s dropped from the Marketplace once again. As YouTube apps go, it’s one of the very best, and given the current lack of apps available at the Marketplace (compared with the App Store and Google Play), WP users need as many decent ones as they can get their paws on.

Keep an eye out for the app, and we’ll update this post in due course once it makes its long-awaited reappearance.