White Xbox One Along With Cheaper $399 Model Releasing This Fall

Now that the hectic release period is over, and the holiday push is just a memory, all attention has now turned to what 2014 may or may not have in store for Microsoft’s Xbox One. With gamers already desperate for new titles to play and with some Xbox services still to go live for the new console, every morsel of information is being greeted with both excitement and skepticism in equal measure.

And so, with new leaked information coming courtesy of a NeoGAF forum member, we have to invite a critical eye when looking over what this tipster says is on the cards for the next 12 months. It may be completely accurate, and it may turn out to be complete gibberish. Only time will tell.

So what is supposed to be on the horizon for the big black box? Well, one of the more interesting tidbits is that it might not be black for too long, with one claim being that a new white Xbox One will be made available to eager gamers at some point during 2014. Rumors suggesting the same have been circulating for a while now, but the backing up of existing presumptions is always a good thing. No timescale has yet been leaked though, so we’ll just have to wait and see.

Other revelations surround games such as Halo Anniversary 2 and Fable Legends, while Forza Horizon is detailed suggesting that a fancy new weather system and social gaming are going to be the big draws. 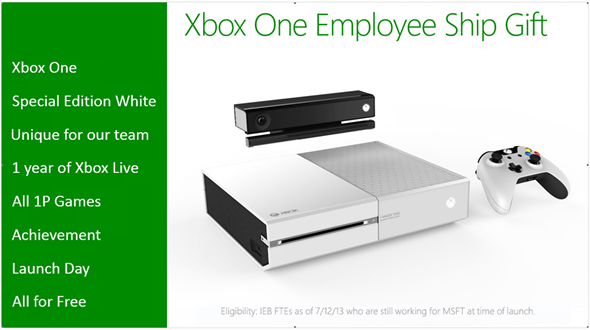 Perhaps the biggest news coming out of the forum post is that a new $399 Xbox One may be a possibility, with the cheaper unit going sans-optical drive. This was a prominent rumor before the Xbox One was announced last year, with suggestions of both Sony and Microsoft going the digital download-only route. We’re dubious about that at this point, but you never do know in this game do you? 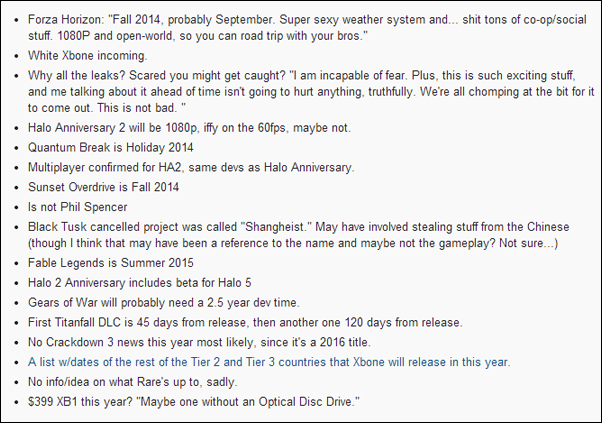 It’s worth having a flick through the big list of possibilities put forward, especially if games like Sunset Overdrive and Quantum Break tickle your fancy. The bad news? A new Gears of War game will probably need a good two and a half years of development before we get to play it.