WhatsApp For iOS 7 Released, Get It From Here!

There are a ton of apps on the App Store which are due for an update for iOS 7, and one of those apps is WhatsApp for iPhone. After a long wait, which almost felt like an eternity, or maybe light-years for some, the famous cross-platform messaging app WhatsApp has been updated with a brand new face for iOS 7.

Before we dive into what the latest update brings to the roster, it’s worth noting that this is a mere cosmetic update with a few touch-ups here and there. Obviously it brings forward the iOS 7 design features that we’ve come to love, but don’t expect anything big here.

As the app’s description notes, the app has been updated for iOS 7, which is pretty much self-explanatory what that means: it’s all flat, minimal and gives up skeuomorphic elements for good.

In-keeping with what iOS 7 has to offer, the new update ties in rather well with the OS as a whole and takes advantage of some of its native features. For instance, the app is Dynamic Type ready, and will obey the font size rules set by the user in Settings > General > Text Size. Apart from Dynamic Type support, you can set new notification alerts and sounds – according to your liking – by heading over to Settings > Notifications > New Message. 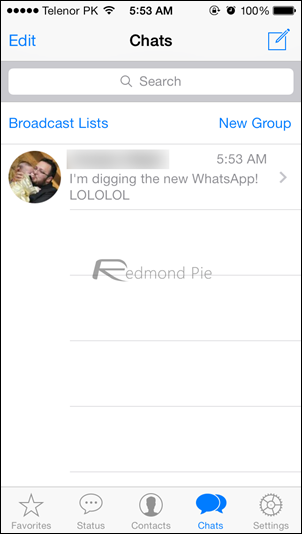 Cosmetic changes are aplenty in the latest update, and having given the new update a run on our iPhone, it’s safe to say that the app looks less clunky and crammed in as before. The new aesthetics really are a sigh of fresh air, and we’re certain that long time WhatsApp users will definitely dig the new UI. 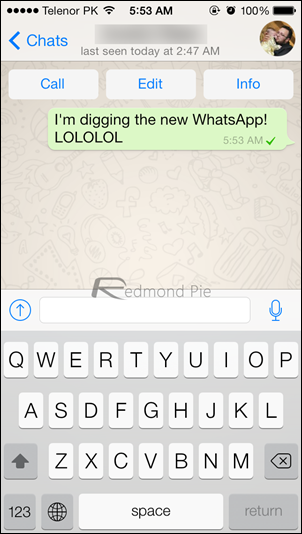 WhatsApp can be downloaded for free from the link which we’ve embedded below. But keep in mind, the first year of usage is absolutely free, after which you have to churn out a dollar for every year of usage. Honestly, that’s a nice deal considering the service you get from WhatsApp.

So, what are you waiting for? Get downloading!

(Download: WhatsApp for iPhone on the iOS App Store)