Ever wished you could view your Twitter timeline from iOS 5’s Notification Center? WeeTwitter is an iOS tweak that displays your newest tweets, @-replies, private messages and even saved searches right on your Notification Center. This tweak was developed by Tyler Flowers, a US-based teenager who developed his first iOS app just a few weeks ago. Now he’s venturing in the jailbreak community as well. 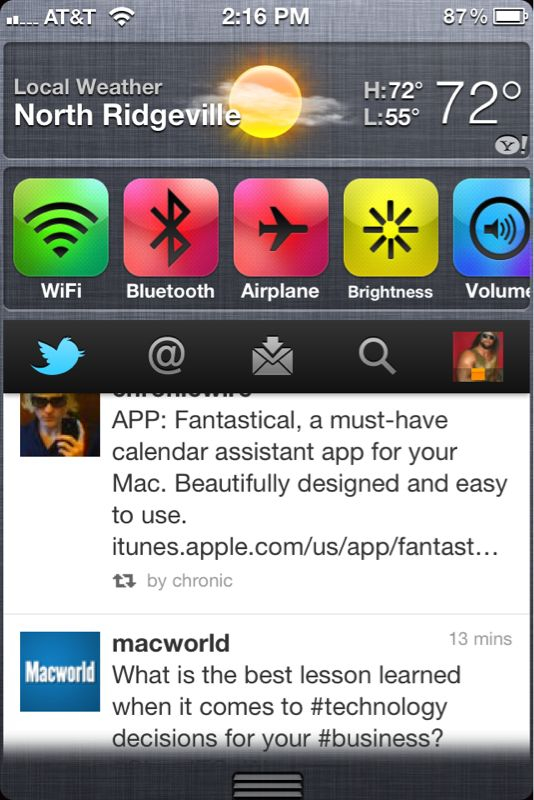 Since this tweak can’t be installed through Cydia, it requires a few more steps (and typing on the terminal). Here is how you do it:

Step 1: Install MobileTerminal from Cydia and set up iPhone Explorer on your computer (find out how here). Once that’s done, plug your phone into your computer.

Step 2: From your computer, download this .deb file. Then launch iPhone Explorer and paste the file you’ve just downloaded into /var/mobile.

alpine [assuming you haven’t changed root iOS password – if you don’t know what I’m talking about, you probably haven’t]

To begin the installation itself, type in:

Step 4: You’re done! Respring or reboot your phone in order to see the changes. If everything goes as planned, your Twitter timeline should now be displayed on your Notification Center.

Just one week after iOS 5’s release, it’s already clear that the jailbreak community has embraced the operating system’s new features. iOS 5’s Notification Center includes widgets, although no third-party development is officially supported by Apple (at least as of yet). However, unofficial developers have since rolled up their sleeves: the first widget for iOS 5, UISettings, allows users to adjust basic iOS settings right from Notification Center.

(Kudos to @johnjessie for the tip)