Have you ever wondered what would happen if you put two flagship smartphones into a tube of Red Bull energy drink and timed how long it took for them to die?

No, neither have we.

As it turns out, that’s exactly what a YouTube user was wondering, so he decided to carry out a little experiment that involved over a thousand dollars of smartphones and a few cans of energy drink. You know, because the nights are long and television isn’t what it used to be. 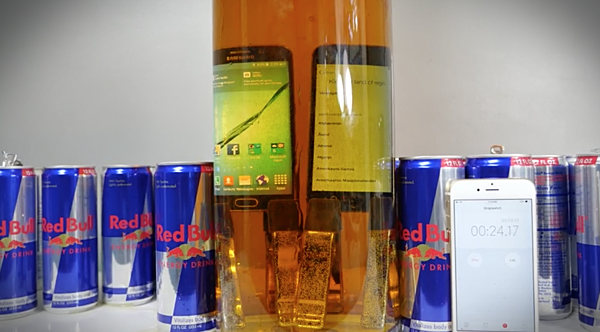 Keen to see whether an iPhone 6 or Galaxy S6 Edge would last the longer when submerged in Red Bull, this intrepid YouTuber dunked a pair of them and started the stopwatch. At around the 9-minute point we see Samsung’s phone get into a spot of difficulty, and when it’s retrieved from its sugary grave it initially looks like things may spring to life but alas, it’s dead and gone for good.

The iPhone 6 on the other hand has seen better days come the half hour mark, but it’s still functional at least. That’s a minor miracle indeed, especially when you remember that neither it nor the Galaxy S6 Edge that it was pitted against are marketed as being even remotely waterproof, or even water resistant for that matter. Samsung’s Galaxy S5 was in fact sold as a waterproof device and received rave reviews because of it, with Samsung deciding to ditch the feature this time around in favor of premium design.

Apple has never claimed any of its smartphones to be waterproof or water resistant, with the Apple Watch its only offering that is capable of going for a dunk – and even then we’re not sure we’d want to drop it into Red Bull!

So at the end of all this we now know that Apple’s smartphone likes Red Bull more than Samsung’s which doesn’t say a lot considering we don’t expect many people to be dropping their phones into a can of the stuff.

Check out the video in its full glory below and be sure to drop us a comment in the section as well. Have you ever dropped your phone in a sugary beverage? How did it turn out for you?