watchOS 2.0.1 Update For Apple Watch Released, Here’s What Is New

Apple has today released the latest version of watchOS for all Apple Watch users. The latest software update for the intelligent timepiece takes the underlying firmware to version 2.0.1, and represents the first point release of watchOS since the second iteration of the platform was released to the public last month after an elongated period of testing with registered developers, bundled with features such as Nightstand Mode, native app support, third-party complications, a variety of new type of watch faces and more.

As is usually the case with relatively minor point updates such as this, Apple has taken the opportunity to fix a number of niggles and bugs that have been bringing headaches to owners of the Apple Watch. There’s also the standard performance enhancements and improvements throughout the firmware that should provider users with a better user-experience when interacting with the Apple Watch on their wrist.

As part of the update, Apple has fixed a niggling issue with calendar synchronization that had seen a number of affected users unable to sync calendar entries from a connected iPhone. There’s also a bug been eradicated that affected those trying to use Live Photos as a watch face on the Apple Watch. Given the fact that Live Photos is one of the defining features of the iPhone 6s and 6s Plus, it’s highly important that this was fixed as soon as possible. Apple has also outlined a number of changes made under-the-hood to improve the battery life on the Watch.

The full accompanying change log for the watchOS 2.0.1 update is as follows:

Those with an Apple Watch are able to access the updated watchOS via the dedicated Watch app on iPhone, from My Watch > General > Software Update. As always, the Apple Watch must have a minimum of 50% battery available, be connected to the charger, and be in range of the connected iPhone for the update to be successful. 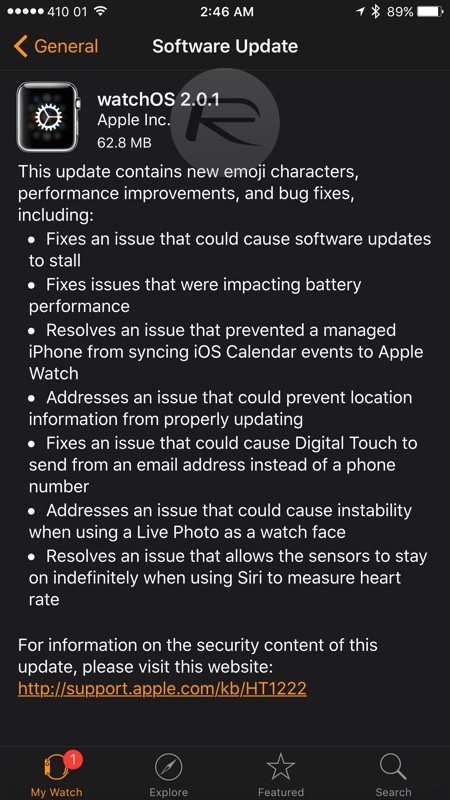