Apple CEO Tim Cook yesterday took to the podium to deliver the 2015 commencement speech at George Washington University, ending the 20-plus minute speech by taking out his iPhone 6 and snapping a photo of his audience.

In the course of his speech, Cook spoke of meeting Governors and Presidents as well as his former boss and Apple co-founder Steve Jobs, with the topic of values and goals running throughout. Cook spoke of meeting President Jimmy Carter and contrasted that expeience with that of meeting Alabama Governor George Wallace in 1997, with the latter apparently making less than a favorable impression on the now Apple chief. 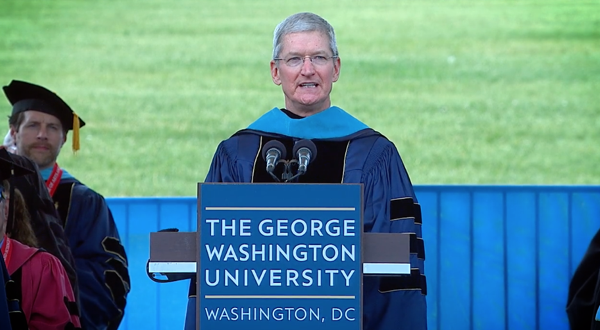 Inevitably though, the subject turned to Jobs, Cook’s mentor and the man who brought him to Apple seventeen years ago.

Values had their place, and yes there were things I wanted to do to change the world, but I always thought I would do that on my own time — not in the office. Steve didn’t see it that way. He was an idealist. He convinced me that if we worked hard and made great products, we too can change then world. To my surprise, I was hooked. I took the job and changed my life. It’s been seventeen years and I have never once looked back.

The prospect of changing the world is one that Apple has aimed its products at ever since the early days in that now famous garage, with Jobs frequently talking about making his mark on the world. The arrival of key products like the iPhone have seen Apple arguably change the way we live, work and play and while it may or may not be hyperbole to say Apple is changing the world, it’s certainly having quite the impact on it.

Cook’s final minutes at the podium left those listening with a message that people can make a difference no matter what they do for work.

Great progress is possible in whatever line of work you choose. There will always be cynics and critics on the sidelines tearing people down. And just as harmful are those people with good intentions who make no contribution at all. The sidelines are not where you want to live your life. The world needs you in the arena.

We can’t argue with that.

For a trip down memory lane, here’s the video of Steve Jobs’ commencement speech from Stanford University (2005).