With all the excitement about Apple’s first 5.5-inch iPhone clouding everyone’s minds, it’s easy to forget that Samsung is already the king of the giant smartphone thanks to its Galaxy Note line of handsets.

Uncomfortably large and just as brash, the Galaxy Note 4 is set to land on European and U.S. stores some time next month, but it’s already gone on sale in South Korea. That’s led Samsung Korea to post a video showing the first Galaxy Note 4 to be unboxed on camera, and it does look decidedly tasty. Apple’s mammoth iPhone 6 Plus may be king of the hill right now, but that may change once Samsung comes to town with its mighty, all-dancing and singing phablet. 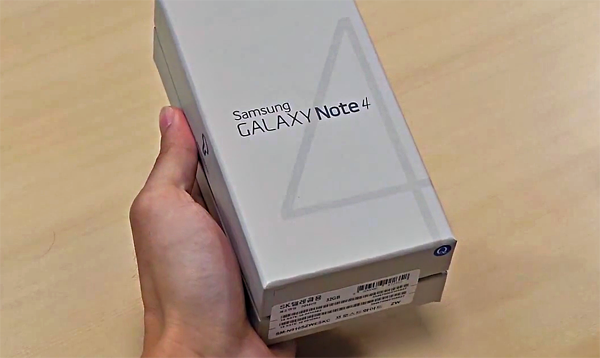 Featuring a 5.7-inch screen that packs a Quad HD display – that’s 2K resolution for all you geeks out there – the Galaxy Note 4 is the successor to a line of popular and huge phones that have garnered something of a cult following. It’s arguable that Apple has joined the phablet fray, but Samsung itself has admitted that it has brought the launch of the Galaxy Note 4 forward slightly in order to combat the positive traction that Apple’s iPhone 6 Plus has been gaining.

As for the unboxing video, it doesn’t tell or show us a great deal that we didn’t already know, but that’s not what these videos are about. If you’re sat counting down the days until you too can do your own Galaxy Note 4 unboxing, then this may just be enough to keep you going until then.

At the very least, it’ll make you want the phone even more, and appreciate it even more when it finally does arrive. So, yeah. You’re welcome for that.

The iPhone 6 and iPhone 6 Plus have caused a bit of damage to Samsung in the past few days, and most of that can be owed to the latter of the two devices, thanks to its massive 5.5-inch display, which, a subset of users have been craving for years. And since Apple has delivered its product, that too before Samsung, it would be interesting to see what the Korean giant has up its sleeve that would lure in iPhone 6 Plus users back to its territory. But considering we’re dealing with Samsung here, we’re certain we’ll be treated to a bunch of software related freebies.