Watch: Crysis 3 Running On 6 Displays In 4K On The Latest Mac Pro [VIDEO]

The trash can-like Mac Pro may be a power house, but since a lot of the big games tend to release for Microsoft’s Windows OS only, it’s not the ideal acquisition for fans of titles like Crysis 3. That said, with a little knowledge, dedication and perseverance, anything is possible, as demonstrated by YouTuber MrThaiBox123, who has got the popular game up and running on is new Mac Pro using Boot Camp.

His Mac Pro set-up, which you’ll probably struggle to emulate unless you have quite a bit of spare cash burning a hole in your pocket, consists of six 27-inch displays hooked up to create a makeshift 4K display; with thanks, in part, to AMD’s Eyefinity technology. When connected up to his Mac Pro running on Boot Camp, he is able to play Crysis 3 at between 40 and 60 fps, and although it’s hard to glean a great deal from a recording, everything seems to be running rather smoothly, if you consider the monstrous resolution it’s running in. 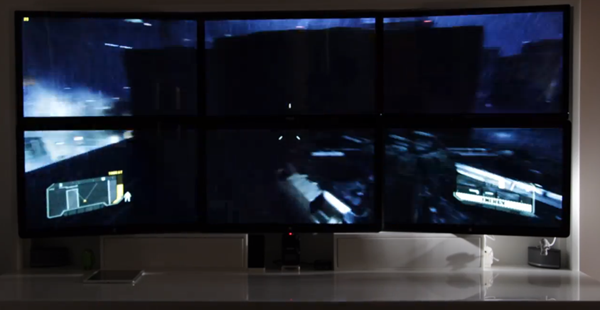 With such a machine as the Mac Pro, you wouldn’t expect lag, for example, to be an issue, but while running Boot Camp can sometimes throw up some unexpected hitches, on this occasion, MrThaiBox123 seems to be enjoying a buttery smooth experience.

Some have been quick to criticize the fact that the Mac Pro cannot as readily be upgraded as the previous model, which is a fair point. While the significantly smaller form factor Apple has managed to achieve is nothing short of remarkable for something so powerful, in years to come, the compact design could prove to be a burden for those wanting to boost certain elements of their system.

Still, even though you may not have so many displays lying around to enjoy the kind of experience seen in the clip, you could, as a Mac Pro owner, still try running a game like Crysis 3 through Boot Camp. If this video is anything to go by, the performance looks top-notch, and even if you purchased the machine for professional use, there’s certainly nothing wrong with kicking back every now and then and enjoying a bit of FPS.

Check out the video below, and be sure to leave your thoughts and comments via the usual channels!