The 2014 FIFA World Cup is well and truly happening in Brazil, and if you want to ensure you don’t miss a second of the 64 total matches being held over the next few weeks, then we’re going to show you how you can tune in via your browser, smartphone, tablet, set-top box or console.

There are many different ways to tune into the action, but precisely how you’re able to catch the action is dependent largely upon which platform you have and where you live. If you’re a hardcore soccer / football fan, you don’t want to miss this show-piece that only occurs once every four years. 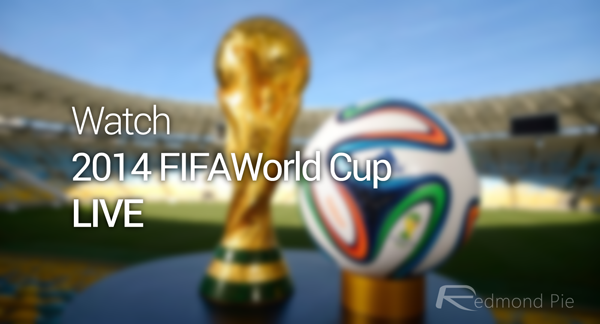 The iPlayer and ITV Player apps should be your first port of call on iOS, which will essentially offer the same coverage you get on the Web version. Also, if you want to watch BBC One live, check out the TVCatchup app.

The WatchESPN app will keep you updated on all of the events as and when they occur, although, you will need to be subscribed.

Users in Canada can get in on the action on iOS by downloading the official CBC app from the iTunes App Store.

If you don’t live in any of the above mentioned countries, please read ‘Worldwide Audience’ section at the bottom of this post for your options on watching World Cup live.

Update x1: Turns out, you can watch World Cup for free using Univision Deportes app available on App Store. Simply download this app, and tap on ‘WATCH LIVE’ to start watching it from any where in the world.

As with iOS, Android users can enjoy the exhibition through the ITV Player and BBC iPlayer apps, as well as TVCatchup.

Stateside viewers, can pick up the WatchESPN app, although it must be noted that you’ll need a subscription to enjoy the coverage.

Just like iOS, Canadian viewers can pick up the official CBC app from the Google Play Store to catch the action live.

If you don’t live in any of the above mentioned countries, please read ‘Worldwide Audience’ section at the bottom of this post for your options on watching World Cup live.

Update x1: Just like on iOS, you can watch World Cup for free using Univision Deportes app available on Google Play Store. Simply download this app, and tap on ‘WATCH LIVE’ to start watching it from any where in the world.

German viewers can keep abreast of every goal, red card, penalty and exquisite piece of skill by pointing their browsers to the following URL: www.zdf.de

Those in the UK have a bunch of options at their disposal. Both the BBC and ITV have shared jurisdiction over the televising of the entire World Cup, and so naturally, their respective websites will be streaming the content live at itv.com/player or bbc.co.uk/iplayer/live/bbcone.

You can also check out the BBC Sport website at bbc.com/sport.

The specially dedicated Brazil 2014 portion of the CBC website, which can be accessed via cbc.ca/soccer/brazil2014, will keep you in the loop when the goals fly in and history is made. At this point, we have no clue who’ll lift the most coveted trophy in football and arguably sport in general, but if you’re in Canada, you can keep up with the action courtesy of CBC.

U.S. viewers can enjoy the action live via espn.go.com/watchespn/, but whilst this caters to browser-based viewing it should be noted that you will need that paid description in order to enjoy the matches and highlights.

If you’re in the ownership of an Apple TV or a Roku set-top box, then you can live stream the event by using the WatchESPN app.

For the rest of you guys, we’ve teamed up with VPN specialists Unblock-Us to bring you two weeks’ worth of free DNS-based VPN, giving you a full 14-day trial as opposed to the standard seven. This a special deal reserved only for Redmond Pie readers, so if you’re interested in keeping up with the World Cup, head on over to the link given right below and get in on the action.

Unblock-Us is supporting the following sites/services to watch live stream of FIFA World Cup from anywhere in the world.