Want To Download Ringtones Of Your Tagged Songs From SoundHound App? This Tweak For iOS Will Help You Do That

The guys over at UnlimApps have been feeling extremely productive as of late, as it was only a couple of days ago when they added one of their latest tweaks on to the Cydia store which allowed users to access their ringtones service directly from within the Shazam music recognition app.

Users who found that service particularly useful may be in for a secondary treat with the release of the SoundHoundTones tweak from the same developer. For those who were feeling left out from the Shazam users’ ability to look and download ringtones based on the songs they had tagged, then worry not, as the SoundHound app has now received the same treatment.

The SoundHoundTones tweak basically offers the exact same functionality as the developer’s previous tweak, by hooking into the official SoundHound app and adding a custom UnlimTones button to the view that contains each individual tagged song. The new added button acts in the same manner as it did in Shazam, it takes the artist’s name and song title and performs a search in the UnlimTones app that is installed as a dependency with this tweak. 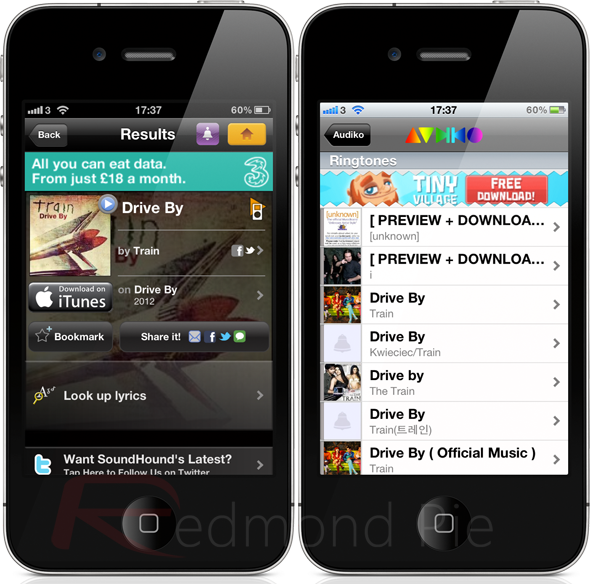 When this particular tweak is downloaded, the UnlimTones app is also installed upon the device if the installer sees that is is not currently installed. After installation, the tagged song view contains an additional purple button that acts as the link between the SoundHound app and the UnlimTones service. Just like their previous Shazam-based tweak, the button doesn’t look out of place and fits in perfectly with the official user interface of the app, which is probably one of the highest compliments a tweak can be given.

Although it doesn’t provide any earth shattering functionality, the purpose of the tweak fits in perfectly with the the original app and offers a service which the developers of SoundHound should have (maybe) offered as a part of their application’s experience. The tweak contains no additional home screen icons, or, settings preferences and works with any installation of SoundHound, free or premium.

SoundHoundTones is available as a free of charge download from the BigBoss repository with no iOS version requirements mentioned.