Updated Facebook’s Android App Can Monitor Your App Usage, Might Spell Concern For Some

If you’re already scared of Facebook, then get ready to don your tin hats once more, because it would appear that the social network can now track what apps you use on your mobile phone. At least, that’s if you happen to use an Android phone.

According to people who have updated their Facebook for Android app, the new permission that is causing all the fuss is the one which mentions the app’s new ability to retrieve running apps. According to the Google Play Store, that means it "Allows the app to retrieve information about currently and recently running tasks. This may allow the app to discover information about which applications are used on the device."

Interestingly, Facebook Home claims to not require any special permissions in order to run. It now appears clear that the reason Facebook Home can make that claim is that the Facebook app is the one that does all the heavy lifting, with Home simply connecting to that. 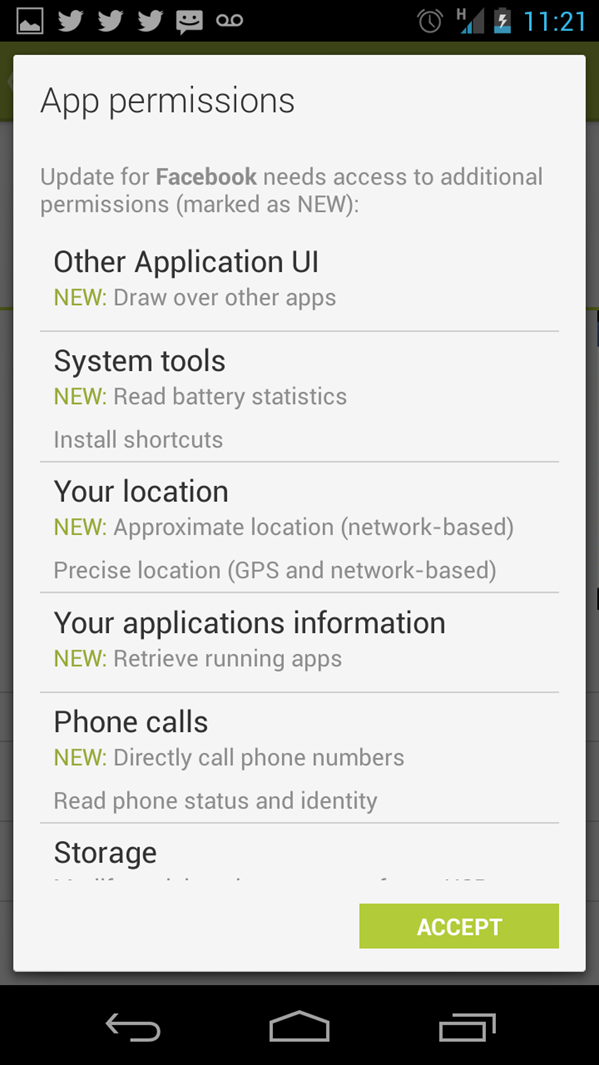 With that in mind, it’s not clear what data either app is indeed collecting or using, but with Facebook’s history of perceived privacy snafus, it’s no great surprise that some are already beginning to suggest all is not as transparent as it could or in fact, should, be.

Our point of view is that Facebook’s not tracking anything Google or any other big company isn’t already, even if it is watching which apps you use. We’re also not convinced there’s anything in there that would be incriminating or embarrassing, and it’s no doubt anonymous data anyway.  That said, we’re obviously spitballing here so don’t take our word for it either way.

Chances are that if you’re concerned about Facebook’s motives then you’re probably not using either Facebook anyway, so the issue is moot. Regardless, it would be interesting to know exactly what’s going in onside Mark Zuckerberg’s head this time around.