TwitkaFly For iPhone Gets A Facebook Plugin, Lets You Update Your Status And Upload Images On The Fly

When talking about popular social networking-based tweaks, TwitkaFly is the one which pops into our minds at first, designed and developed by iOS developer Moeseth. The basis of the extension is quite simple when installed, it allows jailbroken users to invoke a modal pop-up window to quickly send out a tweet to the Twitter network.

Being able to quickly and efficiently send out a tweet from anywhere within the device is all well and good, but Twitter only accounts for a small portion of the social networking stratosphere, leaving the jailbroken portion of the 800 million Facebook users feeling somewhat neglected. If you fall into the Facebook using category, then worry no longer as an official TwitkaFly Facebook plugin is now available.

The additional Facebook offering is an entirely separate download and obviously depends on TwitkaFly being previously purchased and installed upon the device in order for it to function. The core functionality of the plugin remains consistent with the original release, which gives the users the ability to update their Facebook status from anywhere on the device using a custom Activator gesture to invoke the interface. 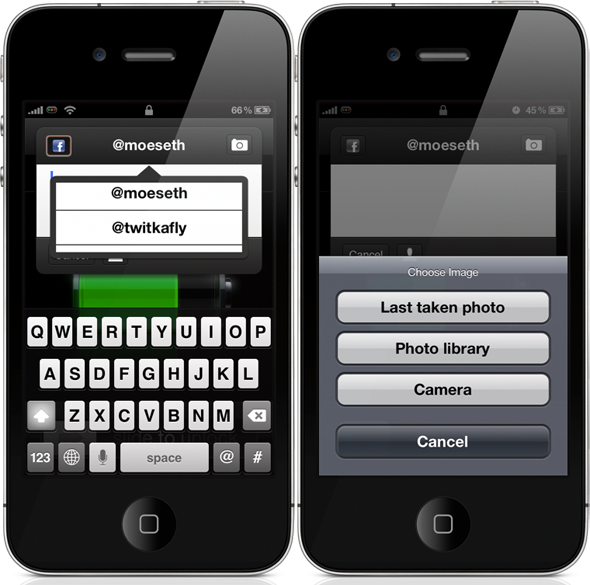 Once installed, the plugin creates its own preferences panel through the native Settings app, allowing users to login to the Facebook network using their personal credentials. This is a one-time necessity, which, when complete allows full access to the tweak’s features, including the ability to update a Facebook status, and also allows users to upload a photo to Facebook using the camera, Camera Roll or the last photo taken from the device itself.

If you are a previous owner and user of TwitkaFly, then the plugin will look extremely familiar to you as it exists to provide the original package with additional social functionality rather than living on as a separate entity on Cydia. There’s no denying the convenience which this latest Moeseth creation brings, and will undoubtedly prove popular in between users who are highly dependent on their online social networking life.

The Facebook plugin for TwitkaFly is available to download from the BigBoss repository for a cost of $0.99 and requires not only a jailbroken device running iOS 4.0 or above, but also ownership of the original TwitkaFly tweak.