Statistics at the back end of 2011 showed that Twitter, the micro blogging service set up in 2006, now has over 300 million active users and is growing its user base rapidly on a day to day basis. Users of the Twitter social network are responsible for posting over 300 million tweets a day and generates an estimated 1.6 billion search queries each and every day which just shows how important the network is becoming.

Based in San Francisco, Twitter has often been said to be the social network where people go to absorb new information and learn from people who have knowledge in certain areas. Since inception, Twitter has undergone some radical design changes as well as adding and removing feature sets, but one of the main gripes from a large portion of Twitter users is the fact that tweets are limited to 140 characters per message, meaning communications need to be short, precise and to the point.

This is the internet and it’s 2012, so obviously ways exist to get around these limitations, but through official Twitter mobile applications and the Twitter website, the 140 character rule always applies. Some third party applications integrate the uses of services such as Tweet More and Twit Longer into their applications which allows a longer message to be posted by uploading the content to the service’s website and then generating a link which lets the recipients read it through a browser in the app, or inline if the app supports it. Probably the most known of these services is TwitLonger which has offered a web based service for quite sometime as well as integration into numerous Twitter applications. 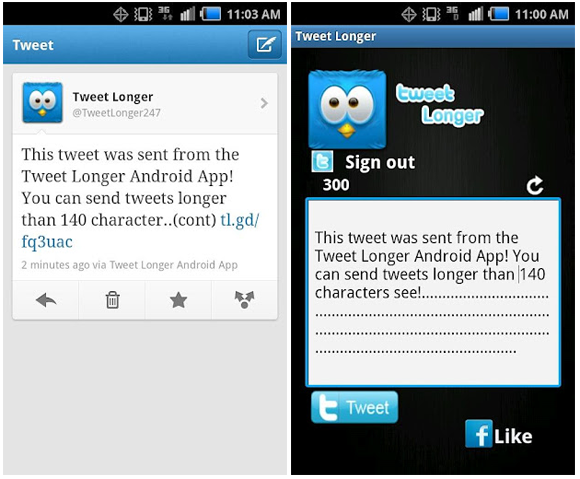 A new application, which hit the Android Marketplace a couple of weeks back uses the official Twitlonger API to let Android users send tweets which breach the 140 character limit. Tweet Longer for Android comes as a free of charge download and gives Android users extra freedom to express themselves when using Twitter. As is usually the case with anything that users the Twitlonger API, a short link is generated within the tweet which lets readers navigate to the URL which produces the full tweet in all its extended glory.

Tweet Longer for Twitter is not a fully functional Twitter client, but it is extremely useful for those who find themselves using the official Twitter Android application and constantly being restricted by the text limitations. Tweet Longer requires Android 2.2 and above with the developer noting that support for Android 3.0 and 4.0 is coming soon.