Human-computer interaction has now stretched far beyond keyboards and mouse into a whole new world where in some cases we are using multiple fingers for interaction, or just motion in other technologies like Project Natal. Thanks to the trendsetter iPhone, today, almost all consumer electronic items like smartphones, tablets, netbooks, notebooks and even bigger screen monitors  are opting for touch or multitouch displays because that is what most of us want. Now just imagine how amazing it would be if you could simply convert your existing display into a an interactive touchscreen simply by sticking a thin polymer film.

This is exactly what a Portuguese company named Displax is currently working on. They have created a polymer film that can do just that, for up to 120-inch screens. 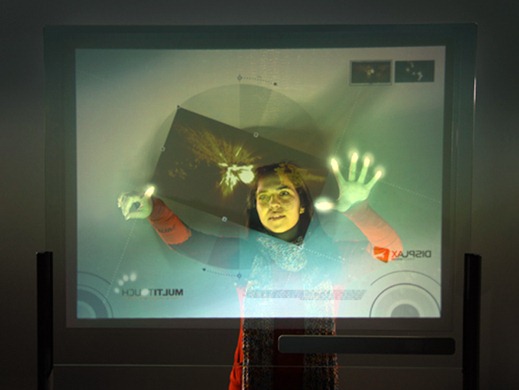 Wired.com reports that this Portugal-based company has created a thinner-than-paper polymer film that can be stucked on a glass, plastic or wood to turn it into an interactive input device. Displax’ latest technology works both on opaque as well as transparent surfaces. The films have 98 percent transparency — a measure of the amount of light that is reflected through the surface. It works on the following principle:

A grid of nanowires are embedded in the thin polymer film that is just about 100 microns thick. A microcontroller processes the multiple input signals it receives from the grid. A finger or two placed on the screen causes an electrical disturbance. The microcontroller analyzes this to decode the location of each input on that grid. The film comes with its own firmware, driver — which connect via a USB connection — and a control panel for user calibration and settings.

Currently, it can detect up to 16 fingers on a 50-inch screen. And the projective capacitance technology that Displax uses is similar to that seen on the iPhone, so the responsiveness of the touch surface is great, says Fonseca.

The first batch of touchscreen displays using Displax technology are going to start shipping in July of this year. [via Gizmodo]