The fact that all iOS apps need to be approved by Apple in order to make their way into the App Store is both a blessing and a curse for the platform, but nobody can deny that it, most of the time at least, guarantees at least some sort of minimum design quality. It also means that developers often need to jump through hoops in order to get their hard work in front of those that they hope will download it.

Until now, the reasons for an app being rejected have been almost a thing of folklore, with only those submitting apps for review being given access to what happens next. Developers don’t tend to share reasons for rejection with the public, but for the first time, Apple has given us a peak behind the curtain.

A new page has popped up on the firm’s website that was first noticed by Apfelpage, and it’s actually quite the eye opener. 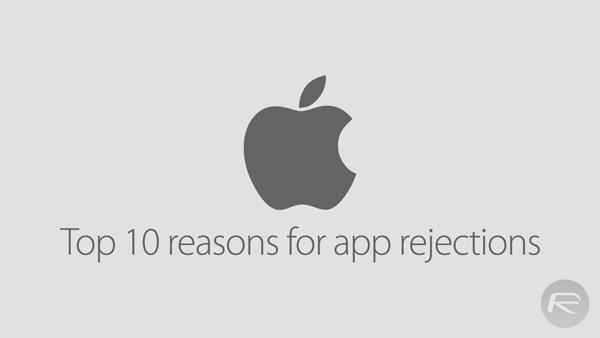 While the page obviously doesn’t go into specifics about the actual apps it has rejected, it does tell us the reasons that it has had to bounce apps back to developers for over the last seven days. By listing the top ten reasons for rejections, Apple is at least giving developers a chance to make sure they don’t fall foul of the same rules.

As an example, the most common reason for rejection for the seven days leading to August 28th was ‘More information needed,’ which sounds worryingly wooly to us. Beyond that, apps having obvious bugs as well as poor interface design are towards the top of the list of Apple’s reasons for rejection.

This more transparent look at how Apple is dealing with App Store submissions is another way in which Apple appears to be changing before our very eyes. More open, and more forthcoming with information, the new Apple is going to take some getting used to.

The complete set of reasons can be found below, and if you’re a developer then be sure to head over to this link and see for yourself what you should do, and don’t, of course. 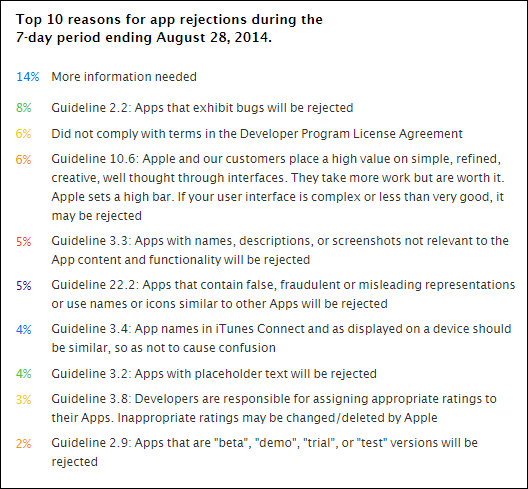 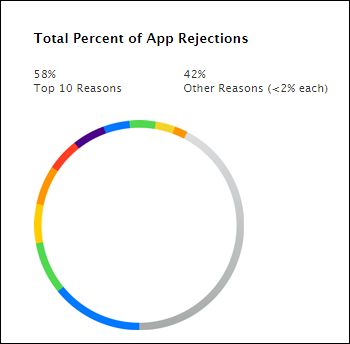 Was your app rejected in light of the reasons above? If yes, then do share your thoughts with us below!