This Slow Motion Film Shot Using iPhone 6 Plus Will Blow You Away! [Video]

“Life Made With Pixels” is a documentary purposed to showcase the power of ‘mobile journalism’, and has been shot using the iPhone 6 Plus, utilizing its slow-mo technology and the occasional use of the Olloclip lens attached to the smartphone.

Our lives today move at a pace so fast that we have lost touch with some of the simpler and finer moments passing us by. Ordinary events like ocean waves splashing into rocks along the beach, the initial burst of a firecracker, the splatter of a drop of water etc. are just a minuscule portion of the extraordinary that we have taken to be quite the ordinary. We can’t slow down such events in real-time, but we can record them in slow motion. While we can even record slo-mo videos on our phones now, nothing comes close to the 240fps slow-mo video capturing tech. of the iPhone 6 Plus. 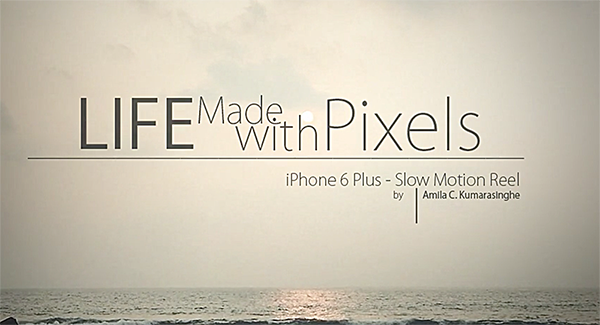 The documentary, while remarking upon how powerful mobile phones have lately become, truly captures the finesse of the iPhone 6 Plus’ 240fps slo-mo video capturing tech, and Amila C. Kumarasinghe, the creator of this documentary, shows aspiring short documentary makers just how, and for what moments can this feature be best made use of.

Kumarasinghe is definitely not the first to have made a documentary using the iPhone 6 Plus’ slo-mo feature, but is one of the few. The video colors and a few more tweaks were done using Adobe Premiere Pro CC according to Kumarasinghe.

Apple has done a very neat job of providing users the ability to slow down portions of the video right on the phone itself, so users are not stuck with a full length slow motion video. It is these smaller things which make the iPhone’s Camera app one of the quickest and easiest to operate, even for complex tasks such as ‘mobile journalism’ as pointed out by Kumarasinghe.