Apple’s iPhone, along with rivals on the market, is rocking a shiny LED light, which serves primarily as a flash for the camera. However, it doubles up rather nicely as a torch, and is especially useful at helping locate things lost under a chair or couch.

There are even a bunch of apps available allowing strobe lighting, Morse Code SOS, and more – bringing multiple uses to an otherwise passive stock feature.

As well as the perk of a torch, it’s no secret that many Apple fans like the little glow of their MacBook, which for some, epitomizes the status attached to owning an Apple notebook. Subsequently, some have queried as to why other Apple devices don’t enjoy the same, glowing bitten Apple which, while pretty useless in terms of productivity, does add a touch of class, and provides a nice finish to a nice product. 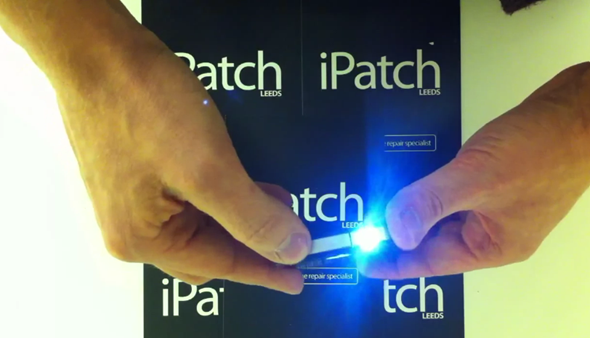 British company iPatch, an iDevice sales and repairs outfit, teased a mod which did exactly that back in September of last year, and although the $160 price tag was an immediate off-put for many, most seemed to agree that it looked awesome nonetheless.

Unfortunately, the product has yet to bear fruit – despite iPatch stating the mod would release a month after showcasing the pictures. Nonetheless, its team remains focused on the iPhone mod, and have now shown the world how the headphone jack can also play a part – doubling up as a mini torch.

I like these guys, since they know the true meaning of being geeky. Despite running a seemingly successful business fixing cracked screens and dodgy click-wheels, they can’t resist tinkering about and creating awesome extras. They’ve even talked about how transparent earbuds can then be used to make glow-in-the-dark headphones, which would certainly set you apart from your peers!

Still, rather than dreaming about what could be, let’s hope iPatch just knuckles down momentarily and brings the service to the market, since I’m sure many of you would like to add a nice glow to your device’s logo at the back.

Is it worth the $160, or is this one you’ll be admiring from afar? Leave your thoughts via the usual mediums below – we’d love to hear them!

(via Cult of Mac)