Privacy and security is one of the main concerns of most people browsing the web on a regular basis, and if it isn’t to you, well, it really ought to be. E-mailing is something we all wind up doing at one point or another, and although our e-mail accounts can be protected by a password, that doesn’t mean to say our privacy is at its optimal level. Many main e-mail providers ensure one types in a substantial secret character collective when choosing a password – with most asking for a letter, number, and and special symbol – but more can certainly be done in order to keep e-mails as private as intended.

When talking about the foremost e-mail vendors, you’d struggle to find one larger than Google’s Gmail service. Arriving relatively late in the day compared with, for example, Hotmail, it’s now widely regarded as the de facto go-to free mail service. Gmail is very powerful, and in my personal experience, does a stellar job in what it’s meant to do, but if you’re constantly sending sensitive information back and forth and wish to keep content strictly for the eyes of the recipient (no, I’m not talking about that kind of content), then the options just are not there. 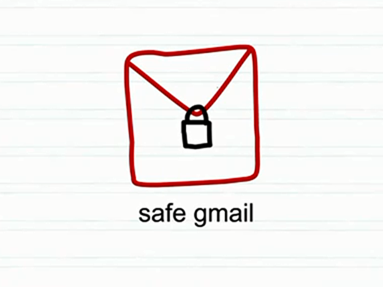 By means of a simple Chrome extension by the name of SafeGmail, you can add PGP-esque encryption to you emails. Once you’ve installed the extension, the "Encrypt" button in Gmail will activate its powers. You then write a question to the recipient (preferably one only they will know the answer to), and send off your message. After a short while, the message is encrypted, and a link is then sent through to the intended recipient. 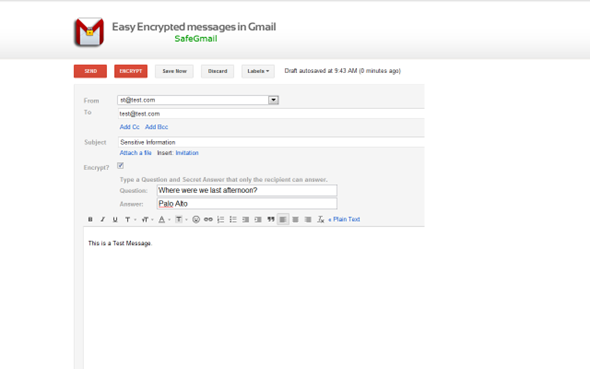 The encryption is carried out on SafeGmail’s servers, but doesn’t have access to your messages, which is good really since that would somewhat defeat the purpose. If you feel like having a little peek under the hood, then check out the open source code, hosted over at GitHub. 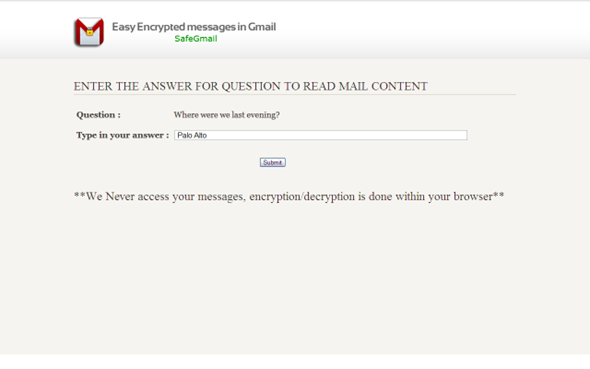 It works pretty well in what it purports to do, and even if your recipient isn’t particularly adept to using browser extensions and such, he or she can easily participate in the encrypted message exchange.