One of the great things about using Google’s Android over one of the rivaling ecosystems is the access to after market firmware releases. If you’re not a fan of the stock offering, you can always download an alternative ROM, but while having so many options out there is in the best interests of consumer choice, it does make things a little bamboozling, particularly for the newbie. Thanks to the work of XDA-Developers member Nimrodity, who has curated a massive database of ROMs and their various features, you can not only find out which ROM is best for you before downloading, but also date of release, build version and other useful information.

With so many individuals and groups working on Android hacks and mods, it would be somewhat ignorant to earmark one for stand-out praise, but XDA community is certainly a pivotal cog in the wheel. While we’re so used to the XDA-Dev forums offering great pieces of software, this extensive table of all the popular ROMs is every bit as useful, and since it’s up on Google Docs, it will be kept up-to-date in the interests of Android modders.

Picking the perfect ROM is certainly not a cut-and-dried thing, particularly when there are no guarantees as to how nicely a piece of firmware will play once flashed onto your device. But having this chart available at a glance is certainly very handy, and if you have been looking to delve into the dark side but have decided not to due to lack of information, the appropriately entitled Custom ROM Comparison Database could be of much use.

It covers all of the most popular, including Paranoid Android, AOKP and of course, CyanogenMod, among others. The fact that it’s an open book — kind of like the Wikipedia of Android ROMs, if you like — means that anybody can add their own, lesser known favorite ROM into the mixer, which will in turn help others to enjoy it as much they do.

It’s a fantastic idea, and only but underlines the community spirit serving as the lifeblood of the Android world. Check out the whole chart hosted on Google Docs here. 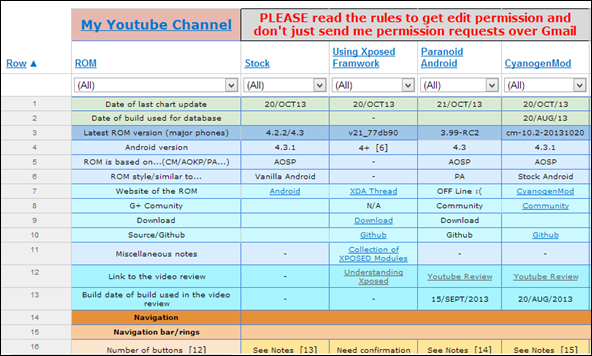