German designer Philipp Tusch has come up with an interesting concept idea for iOS 7’s weather app, which takes the look and feel of Android’s offering and brings it straight to the iPhone. Not only does it look clean and crisp, but it is a vast improvement on the dull, monotonous, dated-looking native Weather app which currently graces every iPhone, iPad and iPod touch.

Soon after former iOS VP Scott Forstall was dropped in rather unceremonious fashion following the iOS 6 Maps saga, it emerged that Sir Jony Ive would be taking his hardware design expertise and, along with Eddy Cue, applying it to the software department. Said to be a long-time loather of skeuomorphism (something Forstall clearly enjoyed), it is thought Ive is leaning towards more of a revamp than the incremental touch-ups to which we have become accustomed.

Thus, we should expect a great deal of the Cupertino’s mobile OS design to change with the next installment, and that Weather app – irrespective of Ive’s influence – is long overdue some updating. The look and feel has never changed, and with so many beautiful weather apps (see Haze, for a shining example), it is simply time for a change.

Although Ive is said to have some radical ideas about which direction he wishes to take iOS, one strongly suspects the look of Android’s weather app has not crossed his mind. Even so, even the most ardent Apple fan would have to admit that, at least in terms of aesthetics, Philipp Tusch’s effort is a great deal easier on the eye. It’s minimalistic, fills up the display nicely, and presents relevant information in a concise manner. 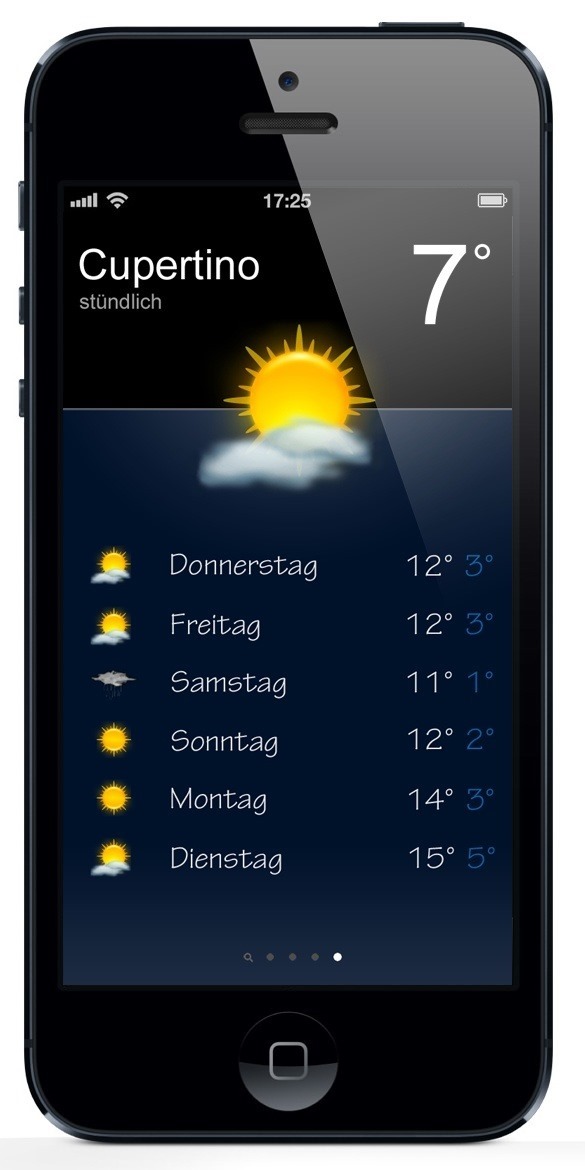 Not too sold on the font, but if this concept were ever to bear fruit, perhaps in the form of a Cydia tweak or standalone app, you would hope the option to alter the style of text would be a standard feature.

iOS 7 is the next major software release for Apple’s mobile device range, and will arrive at some point later this year. Although iOS 6 is the most widely-adopted version of iOS to date, the number of devices in circulation (coupled with the OTA facility) means Apple would be foolish to use the impressive numbers to paper over the cracks of the latest firmware.

The Weather app may not be atop the list of priorities, but a similar offering to the one illustrated by the concept would be more than welcome.