This App For iOS Tells You How Often You Access An App, And For How Long

I must confess, when it comes to my iOS devices, I’m a bit of an app fiend, and with 64GB of storage space on my iPhone and iPad, I see no reason to delete anything – even if I don’t regularly use an app. As such, I have a few hundred different apps and games on each, and although I have a rough idea of which I utilize the most, there’s no way of keeping an accurate record of which I use, and for how long.

AppAnalytics is a brand-new tweak/app over at the Cydia store, and offers an in-depth log of your app-using habits. Once installed, it will list each and every app you’ve accessed since installation, how many times you’ve opened it, and the total amount of time you’ve spent using it.

This information is not only interesting for the sake of knowing which apps you depend on the most, but can have some real practical uses also. For example, having used it for a day, I’m not too surprised to see BiteSMS, Phone, Instagram and Disc Drivin’ as my top four, but instead of having Disc Drivin’ locked away in a folder, I’ve now given it pride of place on my dock, meaning it’s a great deal easier to access.

It can also be a good indicator of apps you ought to delete. As stated earlier, I don’t particularly like removing apps from my home screen, but there comes a time when needs must (or excess iTunes downloading has forced you to free up space), and by checking AppAnalytics regularly, you can see which apps are being left out in the cold, and remove them accordingly. Pretty handy if you’re asking me.

Overall, it’s a very interesting and informative tweak, and as a keen statistician, it’s one I certainly won’t be deleting in a hurry, for now at least.

It costs just 99 cents over at the BigBoss repository, which will be among your default list of sources unless you’ve chosen to manually delete it. With Cydia harboring it’s fair. 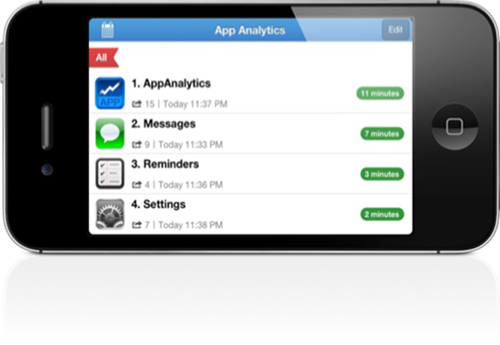