So we know Siri is just about the coolest thing this year in mobile technology, but though still limited by its creation, there are companies out there looking to expand on Siri’s usefulness. Queue ThinkGeek. 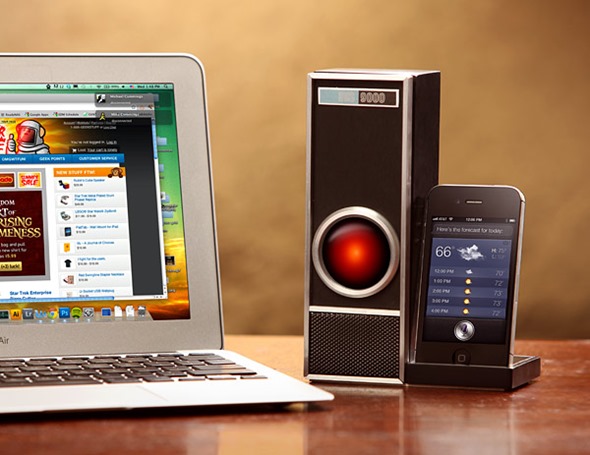 How would you like to click a button, away from your sweet Apple iPhone 4S, and initiate Siri? Further, how would you like to interact with it from across the room and be able to hear and understand it’s responses. Well now you can! With ThinkGeek’s Iris 9000 you can do just that.

Iris 9000 is a remote activated systems that includes a speaker and a dock. Your iPhone 4S is cradled in the dock and when you click the button on your remote to activate Siri, the voice command responses are blasted through a speaker. The device also includes a mic that will allow you to be heard from up to 50 feet away. As you may expect, you can perform all normal Siri tasks through the Iris 9000 while even using it as a speaker phone for phone calls, isn’t that something? 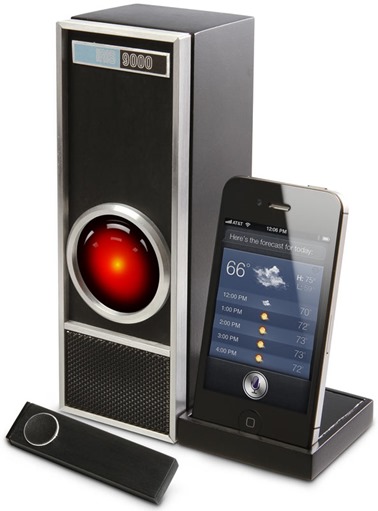 Iris 9000 resembles HAL 9000, from the Space Odyssey saga, an artificial intelligence that interacts with the astronaut crew of the Discovery One spacecraft, usually represented as a red television-camera eye found throughout the ship. You may remember the famous quote, "Dave, I’m afraid I can’t let you do that." It seems that HAL 9000 and Siri have a lot in common and will both let you know when they don’t understand or cannot perform a function. I think Siri should have been named after SAL 9000, the female twin of HAL 9000 that has access to a database of knowledge unlike HAL. Sounds pretty fitting to me!

The complete product features are as follows:

– Control your iPhone 4S and Siri from across the room
– Classic Sci-fi styling. Aluminum accents.
– Included micro remote triggers Siri with a single button press
– Built-in mic picks up your voice at a distance
– Embedded speaker amplifies Siri’s responses
– Use as a standard speakerphone to make and receive calls
– Glowing LED eye flickers along with Siri’s voice
– Powered by included 120-240V AC adapter

And oh, if you’re thinking about it; the product is only compatible with the iPhone 4S for obvious reasons.

You can pick up your very own Iris 9000 from ThinkGeek here for a fair price of just $59.99, but currently it is listed as ‘Out of stock’. While you are over there, check out the other crazy items they have for sale. The site has a lot of cool things! I especially want the USB missile launcher for the work office.