Apple’s early iPhone 6 and 6 Plus sales figures suggest that everything in the Cupertino’s walled garden is rosy, and having shifted ten million units in the first weekend alone, the launch in China later on this month is only going to add to the impressive start that the handsets have made. But there have been some issues, notably "Bendgate", which spawned from some much-publicized complaints that the larger of the two new devices was unduly susceptible to bending when placed in a user’s pocket. Apple has since dispelled the rumor, suggesting that it had received only 9 Bendgate-related quibbles from customers the last we heard, and one particular owner has sought to pay heed to Bendgate once and for all in a rather entertaining video.

The guy in question, Abood Mohamed on Facebook, decided to put the whole Bendgate palaver to the test in what we could only describe as a very unconventional experiment. In a video, Mohamed, who is certainly carrying a little extra timber than your average user, proceeds to place the gold iPhone 6 Plus into his pocket, sit down on a wooden bench, and move around a little, rocking from side to side. After about 20 seconds, he then extracts the device, waves it in front of the camera, and concludes that the device does not bend under the kind of strain that the iPhone could encounter on a daily basis. 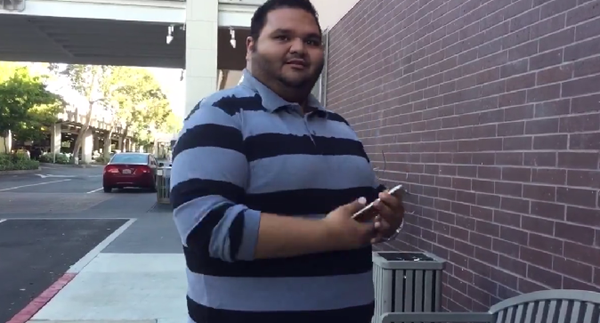 Of course, the video doesn’t actually tell us a great deal, and offers about as much proof of ruggedness as those arbitrary drop tests. Still, we watch drop tests for entertainment as much as to see whether a gadget can cope with landing on different surfaces, and although Mohamed’s clip runs for less than a minute, it’s still pretty darned funny.

As with Antennagate, which, unlike Bendgate, was a real issue affecting a significant number of early iPhone 4 adopters, it’s likely that this mini online storm will soon pass, and both iOS and Android fanboys will find a new topic to squabble over.

Some people take this business very personally indeed, and given the amount of unsuitable language (and hand gestures) included in this video, it seems that our friend Abood is very defensive of his latest acquisition: