Although the mobile market has taken some time to adapt to a touch-based interface, there’s no dispute that apps implementing a certain amount of touch-gestures are infinitely enhanced. Switcher for Android has prided itself on this ideal, and today, developer Vito Cassisi has updated his popular application.

Android’s multitasking functionality is based around the familiar press-and-wait ethos, but given the positive response to swipe, gesture-based apps, Switcher has done an excellent job of capitalizing on the consumer’s want for a smoother experience. In a nutshell, it allows Android users to navigate between running apps – or all apps – using very basic gestures.

Mr. Cassisi dreamed up the idea whilst sitting on a train, and having become a little alienated with the home and back button method of opening a new app, decided to put his sweeping thoughts to practice.

After that, as they say, he never looked back, and Switcher has grown to become one of the most useful utilities on the entire Android platform. What’s more, if you’re a little worried about the depicted gestures interfering with your normal in-app scrolling gestures, you’ll be pleased to know that the zones in which the gestures have been placed mean they almost never cross over, so you’re unlikely to ever confuse a Switcher gesture with a pass in First Touch Soccer, or a flick of an angry bird in, well, Angry Birds. 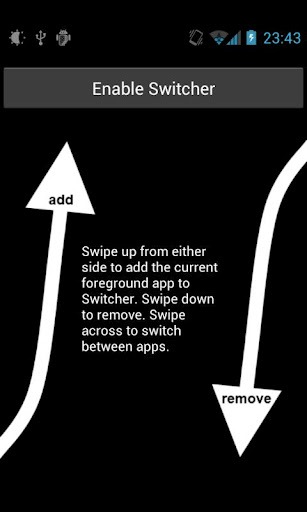 Switcher is by no means the finished article, and as such, may not perform flawlessly on your device. Moreover, Cassisi is working on improving Switcher at almost every opportunity, so if you’re not too keen on updating your apps every five minutes, this may be something to consider before downloading.

On a more positive note, as well as being absolutely free of charge (and thus, essentially, risk free), it has also received mostly positive ratings from the Google Play Store hitherto, so if you’re looking to make your Android experience just a little bit smoother and more operable, then please click the link provided below and give Switcher a blast for yourself.

Does it make things easier, or is it a bit of an invasion of the general Android experience? We’d love for you to share your thoughts via our Facebook or Google+ pages, also shown below.