The Internet lit up yesterday when it was announced that developer Erik Roystan Ross had posted a playable version of Super Mario 64 that he had built using the Unity engine. By creating the first level of the famous Mario game, he was showcasing his new Unity tool called ‘Super Character Controller’ which makes it easier to create character animation. Turns out it’s good enough to make whole Mario levels, which has to be a good sign.

Beyond that though, thanks to Unity’s ability to have its projects ported to other systems, Mobot’s James Fietch converted it to run as an iPhone game by adding some basic virtual controls. The folks over at Touch Arcade managed to get the thing running on an iPhone 6 and then filmed it. After watching the thing in action, it’s worth remembering that this is little more than a tech demo. That being said, it’s an impressive one, no doubt. We’re big fans of Mario at the best of times, but being able to play it on an iPhone? Oh yes, please. 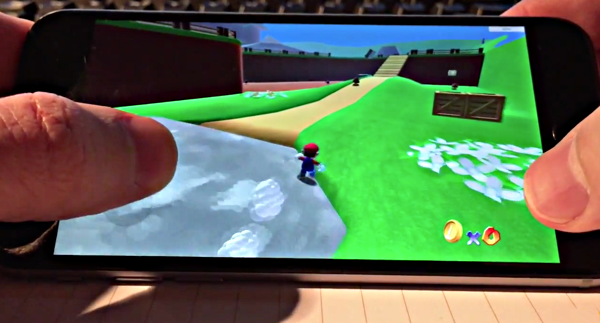 Interestingly, Nintendo announced just recently that it is looking to bring some of its games to smartphones after having spent years saying that it would do no such thing. While Nintendo hasn’t said that it will port its classics over to the likes of iOS and Android we can only hope that projects such as this will push the Japanese firm in the right direction. We know we’d love to play Mario Kart on our iPhones and iPads, and we suspect you would too.

Check out the video of Super Mario 64 HD in action on an iPhone 6 and marvel at how technology has changed since the original Nintendo 64 version!