The iPhone 5 and fifth-generation iPod touches have been with us for quite some time now and although they have proved to be extremely successful, consumers are still noticing that some of their favorite apps have yet to be updated with full user-interface support for the larger display that Apple bundled with the devices. After the initial influx of app updates around the release date of the hardware, things have substantially slowed down, but today has brought two notable and much welcomed iPhone 5 based updates, including one that some users never thought would actually come due to the recent Google acquisition.

The App Store is now officially serving updates for the extremely popular Sparrow mail client as well as Firemint’s second iteration of their insanely popular Real Racing franchise. For those disgruntled users who weren’t happy with the native Mail app within iOS and wanted a little more power over their email, Sparrow was the almost perfect solution. After cutting its teeth on the Mac App Store and gaining a name for being easy to use and extremely powerful, the iPhone version was welcomed with open arms until Google acquired the company and announced that major development would be discontinued.

The latest version of the email app brings full user-interface support for the larger display on the new iPhone and iPod touch models as well as going a little step further and adding compatibility with Passbook links that were introduced with iOS 6. Users can now invoke the Passbook app and saved vouchers and cards directly from within the Sparrow app. Firemint have also taken the opportunity to get their house in order by releasing version 1.13.02 of Real Racing 2 that once again brings full support for the latest supported Apple hardware.

A number of small enhancements have been made within the game to ensure full compatibility with iOS 6 as well as introducing full widescreen, adrenaline pumping racing on the iPhone 5 and fifth-generation iPod touch. The game itself has remained largely untouched, with the changes only affecting how the graphics are rendered on the display to maximize screen real estate. Another two examples of big developers pushing out updates for popular apps, and here’s hoping the rest follow suit. 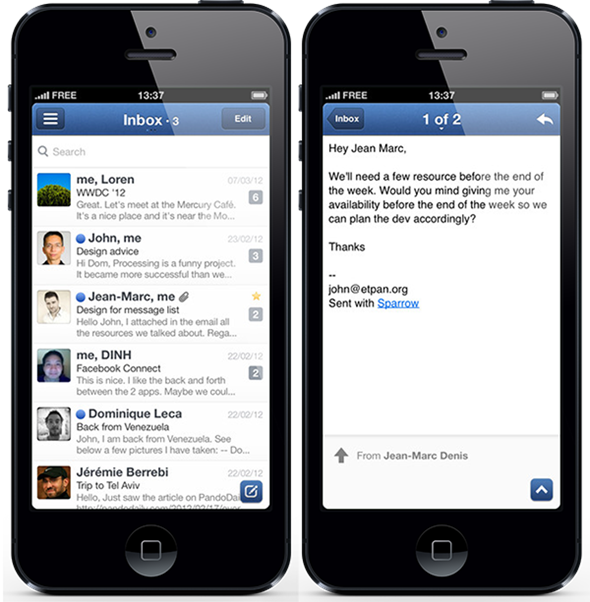 (Source: Sparrow for iOS and Real Racing 2 for the iPhone and iPod touch on the App Store)