If you have been a loyal user of Skype, you have likely run into the hurdle of reaching a user when they are offline. While sending SMS messages often does the trick, sometimes a video message is just more convenient. The good news is that Skype has begun rolling out this feature in the form of an update for its Mac, iPhone and Android client, with support for other platforms such as Windows coming very soon.

On the Mac, the new feature simply adds a new “Send Video Message” option, bringing users to a familiar camera screen with a record button at the bottom, as well as Cancel and Send options; the implementation varies from device to device but it largely remains consistent. On the Mac as well, and presumably on Windows and other desktop platforms once they are supported, it is possible to save received video messages as standard MP4 files.

Recorded video messages can be up to 3 minutes long, therefore do not expect to be able to send over long monologues to your friends: this feature is for short messages only.

Ironically enough, it seems like Microsoft, the parent company of Skype, was unable to ready a Windows release at the same time as rival platforms such as OS X and iOS. However, according to a spokesman for the company, Windows support is on the way, though no specific release timeframe was given:

"We’ll let you know when we expand the service to the platform."

This feature is only available for users in the US and the UK, although a greater rollout to more countries will take place shortly, according to the company. If you are using OS X, iOS or Android, you can give this new feature a try today by downloading the last version of the software, which also include some bug fixes and small user interface improvements. 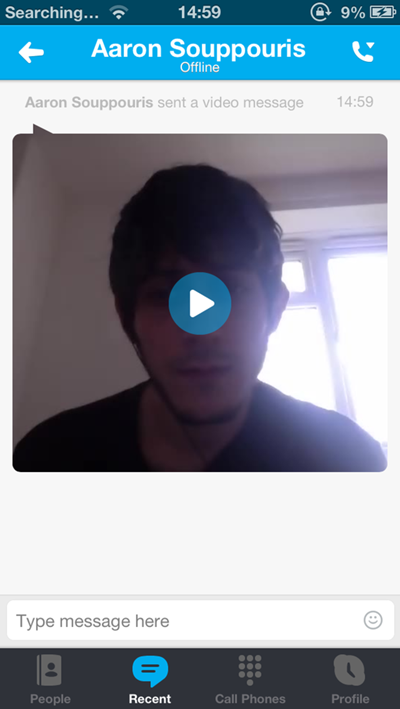 While there is currently no cost for the service, at least for the first 20 messages you send out, Skype has hinted that it will look to charge for this service in the future. This is understandable, given the amount of infrastructure needed to be put in place in order to get Video Messages up and running.