For Skype fans, and more specifically those who lean towards the Windows Phone side of the mobile world, it seems as if the official Skype app has been hanging over our heads for quite some time now. Skype for Windows Phone was first released as a public beta at the end of February this year.

Fast forward almost eight weeks, and Microsoft have finally deemed Skype for Windows Phone a functional and complete app worthy of a 1.0 version and ready for public consumption. The final 1.0 version of the Skype application has come just in time for all those enthusiastic consumers who are raiding local stores to snap up the Nokia Lumia 900, the latest must have smartphone. The Skype app is now live in the Windows Phone Marketplace and brings with it all of the features you would expect from a mobile version of the popular software that was originally created by Niklas Zennström and Janus Friis but subsequently purchased by Microsoft in 2011. After downloading, users will be able to place voice and video calls to any of their contacts as well as make use of the built-in instant messaging type features to send text based messages.

Calls to other Skype users are obviously free of charge with the app not being platform limited, meaning that Windows Phone Skype users can place voice and video calls to any worldwide Skype user, regardless of the platform they are using Skype on. The ability to search through and add new contacts is a welcome feature, with the final release also benefitting from some user interface improvements over the beta version. 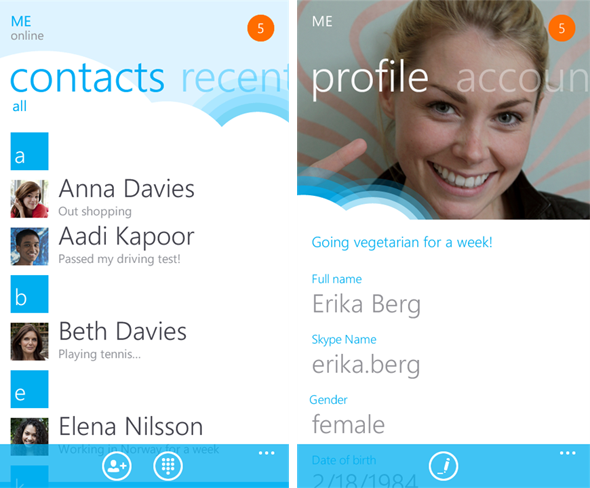 The lack of backgrounding abilities may prove to be a bit of a deal breaker for a lot of users, meaning that the Skype app actually has to be running for incoming calls to be received. With that in mind, Skype for Windows Phone does seem to perform very well over 3G and LTE data connections, as well as being extremely functional on Wi-Fi as you would expect.

The small inadequacies of the software shouldn’t detract from what is otherwise a very polished and attractive looking Skype implementation and is sure to be a welcome addition to the Windows Phone Marketplace for regular users of the established VoIP service.