Serval For Android: Prepare For The End Of The World By Joining Ad Hoc WiFi Mesh Network [Root Only]

December 21st, 2012 is only a few months away folks, so whether you believe that it will spell catastrophe for Earth or not, it’s best to be prepared for it than be sorry.

Now, in the case that something serious does go down on the day in question*, chances are that wireless telecommunication networks around the world will stop working. Keeping that in mind, folks from the Serval Project have created a new app for Android called The Serval Mesh that aims to keep mobile communications alive in case infrastructure gets severely damaged when an asteroid hits Earth. Check it out after the jump!

Serval uses ad hoc WiFi to connect Android smartphones directly to other Androids smartphones which have the Serval Project app installed. Doing so forms a strong mesh network through which all these smartphones can talk to each other without the use of wireless network towers.

This technology has existed for a long time in the form of open-source software, but has only now been ported to mobile devices. Serval’s special feature is that it lets users hop onto the mesh network using their existing phone numbers, so there won’t be any need to create special IDs.

Mobile communications are useful, but depend on infrastructure that can be damaged, overwhelmed, or even absent. So we assumed zero infrastructure, and came up with this; just the phones talking to each other, relaying calls, and resolving numbers for each other; a cellular commons using our unique Serval Mesh telephony software.

Serval, then, is basically a carrier-independent, tower-less wireless telecommunications network that is run by people. It is completely free and open-source, can be activated within seconds and, because of its distributed nature, makes for minimum downtime. 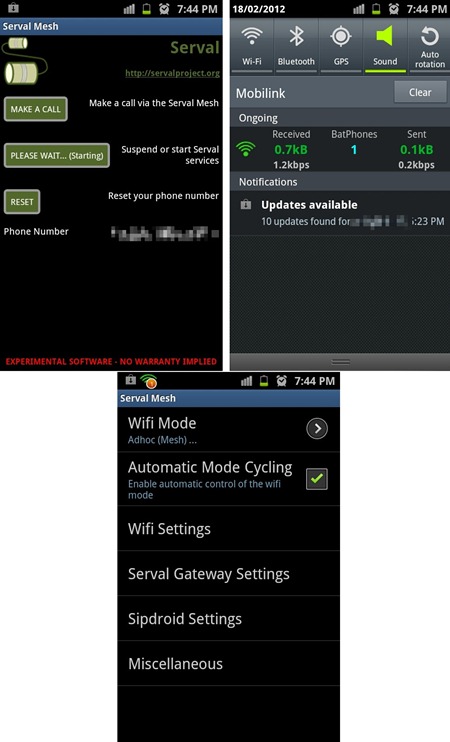 Serval doesn’t have any use as of right now, but we still highly recommend that you install it. It is sure to come handy when zombies/aliens/alien-zombies hit Earth.

Note: Because it requires privileged access to system resources, Serval only works on rooted Android smartphones.

*I personally think December 21st, 2012 will just be another day.