Tablet and smartphone owners generally opt for a particular mobile platform over others for a wide variety of reasons. In a lot of cases, you simply get staunch iOS fans who would never touch an Android device, let alone accept it as their main point of usage. Conversely, the same can be said for certain Android device owners who can’t fathom the idea of moving over to the dark side. For others however, the choice often comes down to things like security, stability, aesthetic appeal of the device hardware and OS interface, and even personal considerations like how much the device costs. If you do care about the stability of a device and platform, then Blancco’s “The State of Mobile Device Performance and Health” research report provides some interesting information about the stability of Android devices compared to the iPhone.

As you can imagine, it’s actually extremely difficult to accurately ascertain which platforms are less vulnerable to software-based glitches, and there’s definitely no instantaneous method for users to be able to compare the failure rates of their own devices and installed apps against other hardware on the same or different platforms. 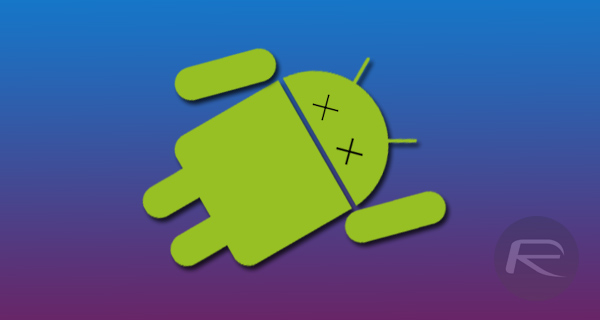 Thankfully, in the case of the latter, that’s where Blancco comes in, by compiling this data which has been released as part of an insight report on a quarterly basis. The latest paper reveals some key insights from Q1 2016, and delivers some harsh news for Android lovers.

The insights instantly show that there is a glaring disparity when it comes to the failure rates of Android and iOS devices. The report suggests that a staggering 44-percent of devices powered by Google’s OS were prone to crashing. That represents a figure that’s nearly double the noted 25-percent crash rate on Apple’s iOS devices. 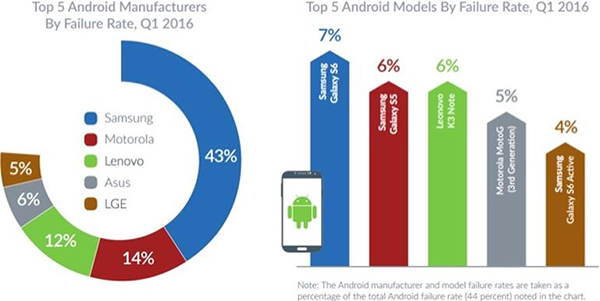 When you think of Android devices, you instantly think of Samsung, and this insight paper won’t make pretty reading for the company’s executives. Out of the top five crashing Android devices, Samsung manufactured three, with the Galaxy S6 accounting for 7-percent of crashes, the Galaxy S5 making up an additional 6-percent, and the less popular Galaxy S6 Active in fifth place with 4-percent of the crash activity.

It is very easy to look at those top two Android devices and instantly think that they all ship with issues and are constantly crashing. However, the numbers are somewhat skewed by the fact that those two devices are probably the most popular and frequently used Android smartphones in the current market, and therefore a lot more of them are in circulation than other device models.

If you do happen to be an iOS owner, then you may find it interesting to learn that the most crash-prone model on that platform is Apple’s iPhone 6 with a 25-percent crash rate.

On an additional note, the report also identifies various features which consumers mostly run into issues with. Topping the charts worldwide is the camera app, and it remains the culprit for most users in Asia as well. However, it appears that North American users are mostly troubled by performance issues, while European users have trouble finding a decent enough network reception.

You can sign up and obtain the latest Blancco report free-of-charge from blancco.com.