No smartphone device is ever going to be classed as perfect. Perfect, as we all know, is an entirely unachievable target that should be aimed for when designing a new product, but expected to be missed. As part of the physical design of its new Galaxy Note 5 flagship, Samsung introduced a new spring-loaded mechanism that allows users to store, as well as reintroduce the S Pen when they desire. However, it seems that user error can not only negate the benefits of the new feature, but can actually cause permanent damage to the handset if the S Pen is inserted incorrectly.

The nifty little feature within the Galaxy Note 5 is extremely simple, but actually pretty awesome as well. The designated slot located at the bottom of Samsung’s latest phablet allows the S Pen to be neatly inserted out of sight, with an integrated spring-based mechanism that pops the stylus back out when a user applies a slight pressure at the insertion point. Simple, but effective. A number of users have been arguing that its design is a little flawed, suggesting that if the S Pen is inserted the wrong way around, it can be become lodged in the new slot and cause lasting damage.

The problem seems to occur when the S Pen becomes lodged due to the slot being crafted to fit the ergonomics of the pen when entered in with the skinny end first. If inserted with the broader end first, releasing the pen requires a fairly substantial amount of force, which certain users have claimed causes permanent damage to the Note 5’s detection feature. As we know, the S Pen detection feature is designed to launch various apps or menu systems when the stylus is removed and the display is either powered on or off. Insertion of the S Pen the wrong way appears to break this feature. 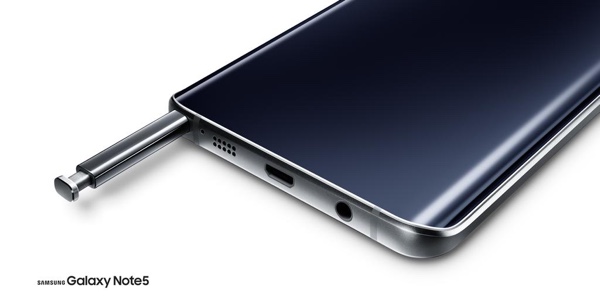 Samsung has yet to comment on the situation but it seems like a relatively trivial problem, one that can be avoided by just using the stylus as it was meant to be; that is don’t insert the S Pen the wrong way around. With that said, when the burden of responsibility lies on the end-user, history has shown us that problems do occur and it’s generally left to the manufacturer to take all of the heat. Here’s hoping that Samsung provides a sensible response to this issue, and in time.