Apple’s Safari browser, native to those running OS X, has just been updated to version 6, bringing with it a whole host of interesting new changes. Atop the menu is the Smart Search Field, which, like the omnibar on Google’s popular Chrome browser, allows you to use one bar for typing web addresses and search queries.

With OS X Mountain Lion now upon us, it’s likely many of the Cupertino’s apps will be updated as well, and the first on the list is Safari 6, updated for those running OS X Lion. Introducing the Smart Search Field is more evolutionary than revolutionary, since most other browsers allow users to make a search or type a web address via one unified bar, but it’s certainly a welcome addition.

Also available in the new iteration is offline reading lists, support for Baidu Chinese and Do Not Track, while the password management has also been somewhat tweaked. The Lion version is missing a couple of additional features mentioned in the release notes of the Mountain Lion version, notably Tab View and iCloud Tabs, but it would seem either Apple forgot to include them in the Lion release, or they’re going to add them with a further update down the line.

The offline reading list allows you to save entire pages within Safari, so if you find yourself in a situation whereby you have no internet connection (increasingly a rarity nowadays), you can catch up on your news, blogs, and other general Web content.

Do Not Track, as the name implies, will request websites not to track your online movements, and while this is a minor little feature, it’ll allow you that extra little bit of privacy when surfing online. 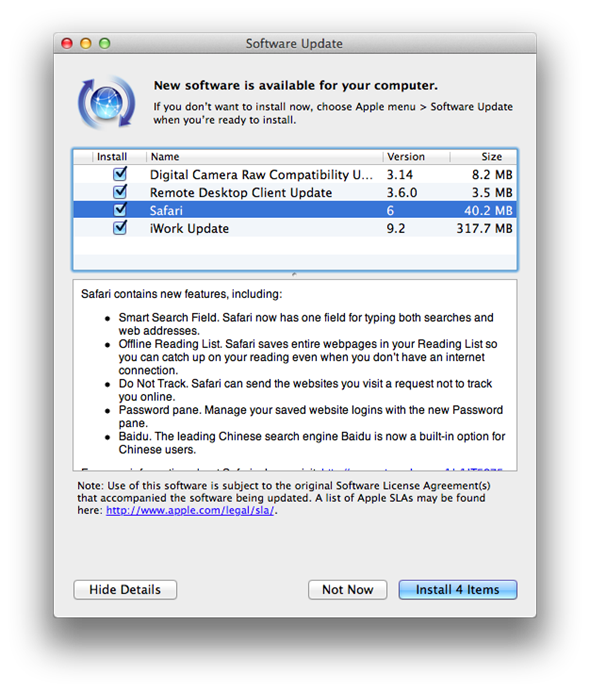 Apple has been pushing for Baidu on iOS devices for the Chinese population, so it’s no surprise to see it being a built-in option for Safari users over in China. Of course, the fact that it has overtaken bitter rivals Google to become the number one search engine in the country wouldn’t have hindered matters, and it does seem the fruit company is paying a lot more attention to the nation it pits as its second biggest market.