Running iOS 8 Or Yosemite Beta? You Need To Read This

Apple has passed on the message to developers that it will be removing all CloudKit data from its servers as of Monday, July 7th. This is not out of the ordinary, and in fact, regularly occurs around the time that iOS and OS X betas arrive, and anybody running iOS 8 beta or OS X Yosemite Developer Preview with data stored in the iCloud Photo Library, Mail Drop or iCloud Drive will need to retrieve it over the next couple of days.

Your photos and videos will remain, since they’re stored on the devices themselves, but while it’s rather unlikely that you’ve stored anything important through the aforementioned beta or preview software, you now have the opportunity salvage anything you may wish to preserve.

This year’s WWDC brought plenty of surprises, and although we knew about OS X 10.10 Yosemite’s aesthetic makeover, we didn’t foresee the wonders of Continuity, a new feature that continues the ongoing amalgamation of OS X and iOS.

The mobile software, meanwhile, has also been handed a generous bump, with Apple notably opening up certain sections of iOS 8 to third-party developers for the first time. Not only will devs be able to better integrate their apps with Siri, the company’s popular voice assistant, but also, users will be able to wave goodbye to the stock keyboard, with the likes of TouchPal, Swype and SwiftKey all queuing up to take advantage of Apple’s long-awaited third-party keyboard support. 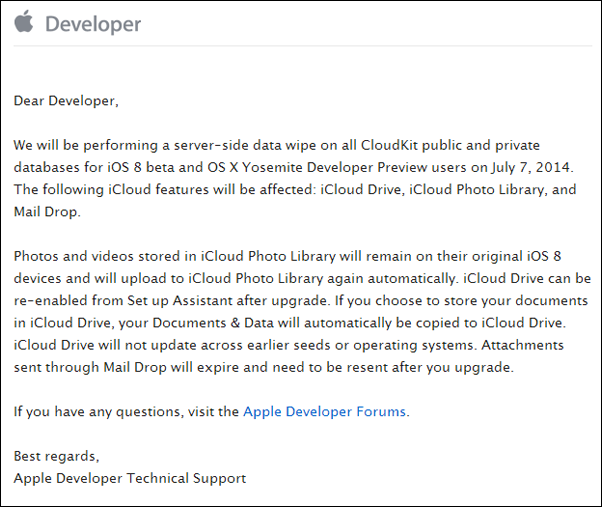 With some proper Notification Center widgets to boot, both iOS 8 and OS X 10.10 Yosemite promise much, and with the beta / preview stage now well and truly off the ground, it’s only a matter of time before each becomes available to the end user.

Although iOS 8 says goodbye to the now antiquated iPhone 4, Yosemite is compatible with every Mac capable of running Mavericks and Mountain Lion, although given the lack of compliant Bluetooth, certain models will have to make do without features like Handoff.

As always, we will keep you updated on any news related to both iOS 8 and OS X 10.10 Yosemite, as well as Apple and the tech world in general, so stay tuned to our around-the-clock coverage here at Redmond Pie.