Since the dawn of Android, we have seen it running on a multitude of hardware platforms. Now, its running on the iPad via the cloud with Myriad’s Alien Dalvik! More after the jump. 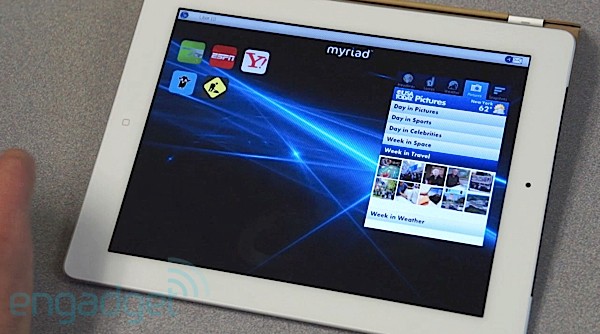 What Myriad has done here is created an app that runs on iOS and interacts with a cloud version of the Android operating system, streaming via H.264 video and allowing you to have the best of both worlds. Myriad has collaborated with Netzyn to provide the cloud system for Alien Dalvik. The cloud system handles the bulk of the work allowing you to run multiple applications in parallel. For the geek, this is a huge step. This is like having your cake and getting to eat all of it and not just one slice. No more switching between devices to get your fix, and to be quite honest, its hard to carry two devices at once to get a taste of one world, but with Alien Dalvik, you can say goodbye to one of your devices, and you already know which one we’re talking about here.

Myriad will be offering developers and app store owners, along with OEM manufacturers the ability to create a development life cycle based around the services that Myriad provides. In turn, this will allow smoother application roll-outs and creating less operating system fragmentation. Myriad is also a founding member of the Open Handset Alliance and has played an integral role in Android solutions from the very beginning.

There will be no option to install or download apps from the Market from an end user perspective. There are also some issues currently with different input devices, mainly devices like TV remotes. Olivier Bartholot, Myriad’s VP of Business Development told Engadget that they are continuing to iron out the bugs to bring Android to every corner of the market. I look forward to seeing this brought to car audio or at least influencing that market niche. Who wouldn’t want Android with Google Maps Navigation built in to their car? Well as long as we were getting regular updates, am I right?