Android has no shortage of apps and tools for a variety of purposes, and it might not be incorrect to say that the platform from Google, just like Apple’s iOS, can now boast “there’s an app for that” without being able to prove it. As a matter of fact, there are certain facets where Android has apps that iOS couldn’t even dream of – or at least the way how these apps function. Want some examples? How about keyboards? Android has plenty of very capable contenders, whereas in iOS, you cannot modify that unless you’re jailbroken. Then, how about replacement messaging application? Go SMS Pro has been a favorite among Android users for a long time now, and then certain manufacturers (like Sony & HTC) have their own custom messaging apps that are pretty useful and aesthetically pleasing. You don’t get that on iOS, and it’s unlikely that you ever would.

Speaking of manufacturer-specific apps, not all of them are really friendly or useful. A lot of times, the OEM software in a device (be it a smartphone, tablet or personal computer) would contain a lot of promotional software – trial versions of commercial applications, items that have come from the manufacturer themselves, partner material et al – that would do nothing except eating the system resources, making them scarce for the actual device usage. In common terminology, this software material is referred to as bloatware. And it has to be removed.

There’s no shortage of bloatware removal solutions for Android both in the Google Play Store and the XDA-Developers forum (there are other sources, too, but I’ll stick to the main ones for now). Most of the popular ones are very feature-laden and capable – in fact, so capable at times that they might leave you desiring for an easier solution. If you have a Samsung Galaxy S III i9300, you may want to try PalaTool. 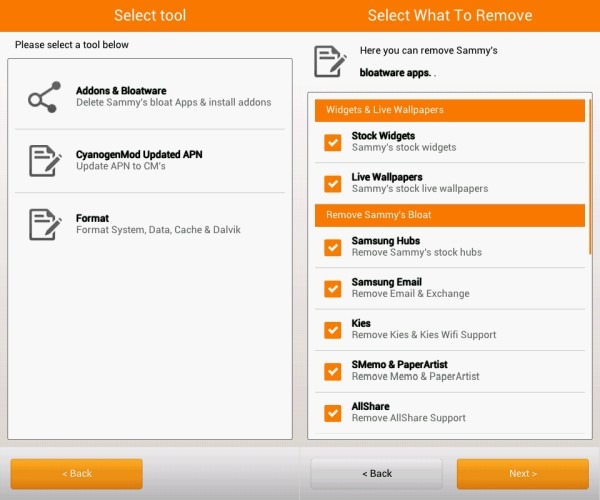 PalaTool is an AROMA-based recovery script that performs three basic functions on a Galaxy S III – removing Samsung’s bloatware, installing CyanogenMod’s APN configuration settings to to any ROM for all the carriers that the former supports, and formatting/wiping system, data, cache and Dalvik cache partitions on your device. It will also let you install certain Nexus 4 UI elements to your device (details available in the source thread). The developer had essentially written the script for his own use, but decided to make it available for public use.

Since PalaTool is based on AROMA, you’ll of course need a custom recovery like ClockworkMod for it to work. Also, while the script was written particularly for the SGS III, it should also work with other TouchWiz-bases high-end Samsung devices. There’s no “officially-supported” list, nevertheless.

Head over to the source link below to give PalaTool a try for your Galaxy S III.